The Midhurst Railways were three Branch lines which were built to serve the market town of Midhurst in the English county of West Sussex. The three lines radiated from the town; south to Chichester, west to Petersfield, and east to Pulborough.

This was opened in two stages, from Pulborough to Petworth on 10 October 1859, as part of the line from Three Bridges which would later become part of the Arun Valley Line through Arundel. Later arriving in Midhurst on 15 October 1866. This line was operated by the London Brighton and South Coast Railway. There were three stations (from east to west), Fittleworth, Petworth, and Selham.

The line was closed in stages, first to passenger trains from 5 February 1955, then goods services were withdrawn from Selham and Fittleworth Stations May 1963. The Midhurst to Petworth section was closed completely on 18 October 1964, leaving Petworth surviving until 20 May 1966. Petworth station survives as a hotel using former Pullman dining carriages, Fittleworth and Selham in private use. Midhurst Station however has been destroyed to make way for a housing estate. 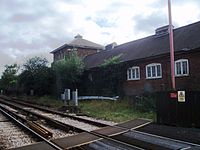 Petersfield Station-The platform to Midhurst was to the north of the gates.

This line was opened on 1 September 1860 by the London and South Western Railway (LSWR), beating the London Brighton and South Coast by 6 years to Midhurst. This line had two stations on its route, Elsted and Rogate. The LSWR line also had its own separate station at Midhurst, however the Southern Railway closed this in 1925 and moved all traffic to the former London Brighton & South Coast Railway station after strengthening the Bepton Road bridge which until then had not been safe for passenger use [1]. The line closed on 7 February 1955.

Unlike the former 'Brighton' station, the LSWR station at Midhurst remains in being, but in use as offices. Rogate station also still stands, but Elsted has been demolished.

Originally attempted in the 1860s, this was opened after much difficulty on the 11 July 1881, also operated by the London Brighton & South Coast Railway. Built to a very grand style the line was built to a double track loading gauge, despite only being single tracked, in case there was ever a need to increase capacity, with the stations provided with large 'Country House' style station buildings. Singleton was built with four platforms and long sidings for the Goodwood Racecourse traffic. However it all proved to be too much for the traffic involved. There were three stations, Lavant, Singleton, and Cocking.

As part of the opening of this line, the station at Midhurst was replaced, in the same 'Country House' Style.

The passenger trains were withdrawn on 6 July 1935 by the Southern Railway, but freight services remained until 19 November 1951 when the section of line between Midhurst and Cocking was withdrawn due to damage by a washout of an embankment, leading to a train crashing into the resulting hole. The freight services to Cocking and Singleton were withdrawn on 28 August 1953 but Lavant lasted until closed to general goods on 3 August 1968 and sugar beet traffic in January 1970. The line was cut back before Lavant station to serve gravel workings from 1972 but this was in turn withdrawn finally in 1991. The line between Lavant and the junction with the mainline is now a cycle path. The station buildings at Cocking, Singleton and Lavant survive, but in private ownership. Very similar buildings are still in Railway use at Sheffield Park, Horsted Keynes and Kingscote stations on the preserved Bluebell Railway

Locomotives used on the lines

On the London Brighton and South Coast Railway lines the Midhurst to Pulborough services were worked by various engines designed by J. C. Craven, until the 1880s when William Stroudley's famous 'Terriers' took over. These were in turn replaced by D1 tanks, the last survivor of which was used on the line during its last days. These were replaced by D3 tanks, then ex LSWR M7s which hauled the last passenger trains in 1955. A succession of ex LB&SCR designs were used on freight trains, including C2xs and E4s, together with occasional turns with Southern Railway tender enginesQ & Q1 as well. The lines did see some diesel locomotives in the last freight days, mostly class 08 shunters, although Class 33 main line diesels ran to Midhurst in that station's last year. Also Class 73 electro-diesels were used on gravel workings on the shortened spur of the branch until 1991.[2]