Born in Tarrytown, New York, Williams had been a farmer, but in 1775 he joined the Continental Army. Serving under Gen. Richard Montgomery, he took part in several campaigns but was forced to leave active service in 1779 after his feet were badly frozen, leaving him partially disabled for life. Despite his condition, Williams continued to lend his support to the volunteer forces in his native area: overnight on September 22–23, 1780, he joined militiamen John Paulding and Isaac Van Wart as part of an armed patrol.[1][2]

The three men seized British officer John André at a site in Tarrytown now called Patriot's Park. It was Williams who physically searched André and discovered, hidden inside his boots, the documents of his secret communication with Benedict Arnold. The militiamen, all local farmers of modest means, refused his considerable bribe and instead delivered him to army headquarters. Arnold's plans to surrender West Point to the British were revealed and foiled, and Williams was among the witnesses when André was hanged as a spy. 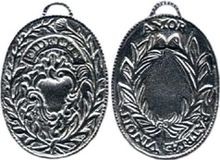 The Fidelity Medallion, the first military decoration of the United States of America.

With George Washington's personal recommendation, the United States Congress awarded Williams, Paulding and Van Wart the first military decoration of the United States, the silver medal known as the Fidelity Medallion. Each of the three also received federal pensions of $200 a year, and prestigious farms awarded by New York State.

The three militiamen were highly celebrated in their lifetimes: commemorations large and small abound in Westchester (see below), and can be found in many disparate parts of the early United States. Among other honors, each of the men had his name given to a county in the new state of Ohio (1803): Williams County is in the extreme northwest corner of the state.

Still, Williams and the others did see their reputations impugned by some. André at his trial had insisted the men were mere brigands; sympathy for him remained in some more aristocratic American quarters (and grew to legend in England, where he was buried in Westminster Abbey). Giving voice to this sympathy, Representative Benjamin Tallmadge of Connecticut persuaded Congress not to grant the men a requested pension increase in 1817, publicly assailing their credibility and motivations. Tallmadge, in 1780 a Major, was the officer to whom André was taken after his capture, and he said he believed André's account over that of the three captors. He said Williams and the other two were "of that class of people who passed between both armies, as often in one camp as in the other." He said that "when Major André's boots were taken off by them, it was to search for plunder, and not to detect treason." He asserted that "if Andre could have given to these men the amount they demanded for his release, he never would have been hung for a spy, nor in captivity.."[3] Despite the slight, the men's popular acclaim continued to grow throughout the 19th century to almost-mythic status. Some modern scholars have interpreted the episode as a major event in early American cultural development, representing the apotheosis of the common man in the new democratic society.

Williams is buried in the Old Stone Fort Cemetery in Schoharie, NY.[4] The inscription on his obelisk reads: "He with his compatriots John Paulding and Isaac VanWart on the 22nd of September 1780, arrested Major John Andre and found on his person treasonable papers in the handwriting of Gen. Benedict Arnold, who sought by treachery to surrender the military post of West Point into the hands of the enemy. In resisting the great bribes of their prisoner for his liberty, they showed their incorruptible patriotism; the American army was saved and our beloved Country became free."

Williams is honored on the monument erected at the site of the capture in Tarrytown, NY; the community has streets named for all three men. Three streets in nearby Elmsford, NY, are named for them as well, although Williams Street was virtually eliminated in the 1960s by construction of I-287; it remains only as a short service road between the highway and Route 9A. Ohio's Williams County is also named after David Williams (see also Van Wert and Paulding Counties, also in Ohio.)