Anchisaurus is a genus of basal sauropodomorph, and was an early herbivorous dinosaur.[1] Until recently it was classed as a member of Prosauropoda. The name comes from the Greek αγχι/agkhi <anchi-; "near, close" + Greek σαυρος/sauros; "lizard", probably referring to Marsh's interpretation of it as intermediate between primitive dinosaurs (at the time Palaeosaurus was an example of what was thought to be a primitive dinosaur) and more derived dinosaurs. Anchisaurus was coined as a replacement name for Amphisaurus, which was itself a replacement name for Hitchcock's Megadactylus, both of which had already been used for other animals.

The first discovery of Anchisaurus remains was made before anything was known about dinosaurs and it was probably the first dinosaur discovery in North America. When, in 1818, some large bones were discovered in Manchester, Connecticut, USA, it was assumed that they were of human origin.[2] Gradually, as a result of further finds in Massachusetts, the number of these bones began to accumulate and, by 1855, they were at least recognized as reptilian.

Hitchcock collected these bones under the name Megadactylus in 1865. Unfortunately, the name was in use, and the famous paleontologist Othniel Charles Marsh renamed it Anchisaurus in 1885. Remains thought to belong to this genus were found in South Africa and China, adding to the theory that these land masses were at the time joined in one super-continent, Pangaea, but these assignments have been contentious (Gyposaurus). A recovery from Nova Scotia may also be an Anchisaurus but this is unconfirmed. 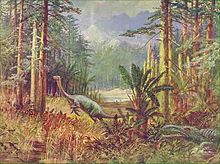 Size of Anchisaurus, compared to a human.

Anchisaurus was a rather small dinosaur, with a length of just over 2 metres (6.6 ft), which helps explain why it was once mistaken for human bones.[2] It probably weighed around 27 kilograms (60 lb). However, Marsh's species A. major (also known as Ammosaurus) was larger, from 2.5 to 4 metres (8 ft 2 in to 13 ft 1 in) and some estimates give it a weight of up to 70 pounds (32 kg). All species of Anchisaurus lived during the Early Jurassic Period; more specifically, the Pliensbachian to Toarcian ages, 200 to 188 million years ago.

Digesting plant matter is a much more intensive biochemical process than digesting meat. This herbivore swallowed gastroliths (gizzard stones) to help break down the food in its stomach.[1] Herbivorous dinosaurs needed a huge gut. Since this had to be positioned in front of the pelvis, balancing on two legs became increasingly difficult, as dinosaurs became larger and they gradually evolved into the quadrupedal position that characterizes the later sauropods such as Diplodocus.[3] Prosauropods represented a middle phase between the earliest bipedal herbivores and the later giant sauropods. Although it was not itself a prosauropod, Anchisaurus was mostly typical of this group,[clarification needed] which flourished briefly during the late Triassic and early Jurassic. Anchisaurus teeth, used to rip food, were shaped like spoons.[1] It had fewer and more widely spaced teeth than true prosauropods, and as Peter Galton and Michael Cluver observed, narrower feet.[2] Anchisaurus would have spent most of its time on four legs but could have reared up on its hind legs to reach higher plants.

On the other hand, some paleontologists[who?] believe Anchisaurus may also have eaten meat, as it was in the transition between these two ultimately distinct groups. The teeth were blunt but with file-like edges, suggesting mostly plant matter was eaten and the jaw hinge was arranged in a way not entirely suited for tearing meat. Nevertheless, there is still some debate. The thumb had a large claw and the large eyes were not entirely on the side (as would be expected in an animal of a natural prey species).

As a quadrupedal/bipedal crossover, Anchisaurus had to have multi-purpose front legs. As 'hands', they could be turned inwards and be used for grasping. It had a simple reversible first 'finger', similar to a 'thumb'. As feet, the five toes could be placed flat against the floor and were strong at the ankle. This unspecialized design is typical of the early dinosaurs. 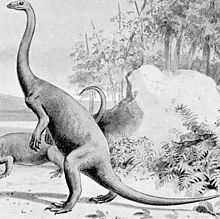 An outdated illustration of Anchisaurus from the early 20th Century.

Due to its primitive appearance, Anchisaurus was previously classified as a prosauropod, a member of a group of animals related to or ancestral to the sauropods. Recent investigations show that a group of traditional prosauropods form a monophyletic sister-group to Sauropoda, and that Anchisaurus is instead closer to sauropods.[4]

The type species is Hitchcock's A. polyzelus. Marsh's A. major ("greater near lizard") is still often considered a valid species (as Ammosaurus) but his A. colurus (1891), once known as Yaleosaurus (von Huene, 1932), is now generally accepted as a female A. polyzelus, and his A. solus of 1892 is now reclassified as Ammosaurus major. However, Ammosaurus major itself may well be a synonym of A. polyzelus.

Broom named Gyposaurus capensis in 1911, from the bones discovered in South Africa but Peter Galton officially renamed it A. capensis in 1976. This species has since been reclassified again and is probably a juvenile of Massospondylus carinatus. G. sinensis was also referred here, but appears to be a distinct animal. Other specimens are still awaiting reclassification. This confusion is typical of the first dinosaurs to be discovered, when classification was not considered as important and precise a process as today.