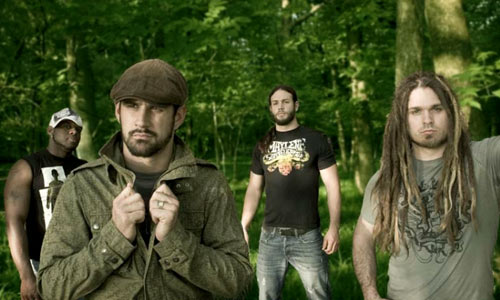 Pillar is a -nominated band currently located in , . Pillar has moved between different genres, including , , and .

Pillar started in Hays, in 1998, when roommates Brad Noone and got together with friends Travis Jenkins, Dustin Adams, and , known as Kalel.

Soon after the release of "Original Superman", Pillar became noticed by , who signed them in mid 2000.

In 2002, took over guitar duties and Pillar released their breakthrough album, "Fireproof". "Fireproof" sold over 300,000 copies, and launched national tours. It also won two s. A few years later Pillar went back into the studio with "Fireproof" and released a newer, richer sounding version with little tweaks in songs, including a Bonus DVD. Resulting in two versions of "Fireproof" on the market.Soon after the release of "Fireproof", drummer joined the band. [cite web
url = http://www.lesterdrums.com/site_pages/bio.php
title = Biography
date =
accessdate = 2008-05-15
publisher = LesterDrums.com]

In 2004, Pillar released their next album " Where Do We Go from Here". "Where Do We Go from Here" was as an instant hit among Christian rock fans everywhere, capturing #1 on sales in the genre for weeks. The album featured multiple hits, including "Bring Me Down", and, "Frontline" which topped the charts for months. Not only did Christian shows and stations play "Bring Me Down", it was requested heavily on secular stations as well.

Pillar released an EP called "" in June 2006. It featured 3 new songs (including "Everything") and 4 live tracks. The other two new songs, "Our Escape" and "Dangerous", are not available on their following album, "The Reckoning". The EP was only available at live shows and at their webstore. A limited number of copies (10,000) were created.

Pillar then recorded their fourth album, "The Reckoning", in early 2006. Travis Wyrick (, We as Human, , Disciple) produced the new album, as he produced all of their previous albums, and it was released on , . In support of "The Reckoning", Pillar embarked on "The Days of the Reckoning Tour" throughout October and November of 2006. Other Christian bands on the tour included , , and . "The Reckoning" received a nomination December 6, 2007 for Best Rock or Rap Gospel Album. This was the first Grammy nomination that Pillar has ever received. [ cite web
url = http://www.grammy.com/GRAMMY_Awards/50th_Show/list.aspx#11
title = 50th Annual Grammy Awards Nominations List
date =
accessdate = 2007-12-07
publisher = The Recording Academy]

Pillar has played at both and . It was revealed at Soulfest 2007 that the name of their next project would be "For the Love of the Game", which was eventually released on , . They brought back the Pillar logo from "Where Do We Go from Here" and "Fireproof" for this album. used the new Pillar song, "For the Love of the Game," during montages highlighting the on its program, "".

Pillar recently helped Eowyn record her latest album "Silent Screams" with Beckley contributing vocals to the title track and Henson and Estelle also playing on the album. Pillar toured on the SHOUTfest tour with and various other artists from September to November 2007. They also had a tour for "For the Love of the Game" from February to April 2008, with Brooke Barrettsmith, Wavorly, and Building 429.

In the fall of 2008, Pillar embarked on the "For The Love of The Fan Tour", which enabled the fans to decide their own ticket price for the show. The tour lasted for three weeks and ended on September 26, 2008 in Dallas, Texas. Lester announced the "For The Love of The Fan Tour" would be his last tour with Pillar. Kalel was not seen playing bass for Pillar, but was being filled in by the bass player of , one of the bands on the tour. Later, Kalel announced on his myspace page that he was no longer in Pillar because of his involvement with helping indie Christian bands such as as well as Lester leaving the band. Kalel also stated that he wanted to be at home with his wife and two children.

As of October 4, 2008, Rob Beckley and Noah Henson are the only original members of Pillar from the "Fireproof" era and will continue on with new band members. As of this time, the new band members have not yet been announced.

The following are nominations that did not result in a win for Pillar, or those nominations that a winner has not yet been announced:
* 2003 Dove Award Nominee for "Hard Music Recorded Song of the Year" - "Fireproof" from the album "Fireproof" by Pillar (Rob Beckley, Michael Wittig, Brad Noone, Noah Henson; Flicker USA)
*2008 for "Best Rock or Rap Gospel Album" for "The Reckoning" by Pillar.

Related bands and side projects

* Godspeed (1992 - 1994): In high school, (Kalel) was the founding member of the band Godspeed. They had one album, "Godspeed," which was recorded December 1993 and released in a limited edition of 200 copies in January, 1994 in cassette format only. It contains 3 tracks: "Searching" (written by Michael Wittig), "Your Life" (written by Michael Wittig), and "Her Tears" (written by and Michael Wittig). The band's name changed from Q: The Source (named after the ) to Godspeed during the recording of this 3 song EP. Band Members at the time of the recording included: on guitar and bass, on bass, on vocals, and David Shawn Valcárcel on drums.

* (2007 - current) is a current side project band that Lester Estelle Jr., Michael Wittig, and Joey Avalos are a part of. Sweet Memorial's frontman, Chris Cleveland, is the lead singer. They have released three songs on iTunes ("Come Around," and "Crazy," and "Walk On," which are also available on limited edition promo CDs). Stars Go Dim are currently recording a full length album.