Molo is one of the seven districts of Iloilo City.[1] It was built by Spaniards and was formerly called the Parian (Chinatown) due to its large number of Chinese residents and their business establishments in the area at the time.

Its name was later changed to Moro during the frequent arrival of Muslim pirates from Mindanao until it later evolved into Molo. Molo was a town before it was absorbed by Iloilo City during its charter on 1937.

Molo is the home to the historic Molo Church (St. Anne Parish) which lies in front of the town square. The national high school of the city, Iloilo City National High School is located here.

The Philippine National Hero Jose Rizal visited this famous church on his way to Manila from exile in Dapitan. He exclaimed as He saw the church "La iglesia bonita!", acknowledging its beauty.[2] 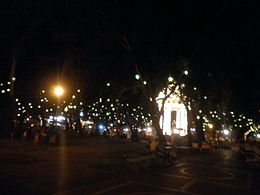 Scene at the Plaza Molo (town square) at Christmas.