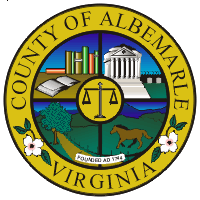 Albemarle County is a county located in the Commonwealth of . Figures from the give an estimated 2005 population of 92,035. Its is Charlottesville.GR|6

Albemarle County is part of the Charlottesville Metropolitan Statistical Area.

In 1744, the created Albemarle County by taking the northern portion of Goochland County. [ Citation
last=Pawlett
first=Nathaniel
title=An Index to Roads Shown in the Albemarle County Surveyors Books 1744-1853
publisher=Virginia Highway & Transportation Research Council
place=Charlottesville, Virginia
year=1976
url = http://www.virginiadot.org/vtrc/main/online_reports/pdf/76-r45.pdf
accessdate = 2008-10-11 ] The county was named in honor of and titular Governor of Virginia at the time.

President was born in the county at Shadwell, though it was then part of Goochland County.

Albemarle is governed by a six-member Board of Supervisor. The long-conservative body's key political issue is growth; its composition recently shifted, with the 2007 election of Ann Mallek, from a 3-3 split on issue to a 4-2 majority for growth opponents. [cite news
title = Purple haze: Albemarle tilts blue-- and red... and purple?
url = http://www.readthehook.com/stories/2007/11/15/NEWS-election-C.rtf.aspx
work =
location = Charlottesville
date = 2007-11-15
accessdate = 2008-02-26
author = Barnes, Lindsay]

:In addition, the city of Charlottesville is d within Albemarle County. Under Virginia law in effect since 1871, all municipalities in the state incorporated as cities are legally and politically independent of any county.fact

The only town in Albemarle County is Scottsville, the original county seat. There are other points in the county colloquially identified as towns, but they are unincorporated, and have no legal status as such. Those include Barboursville, Crozet, Earlysville, Free Union, Ivy, Keene and Keswick, among many smaller hamlets.