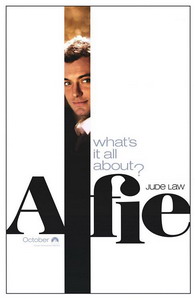 "Alfie" is a 2004 American-British starring as the title character. It is written and directed by and a of the 1966 film of the same name starring .

The 2004 version of "Alfie" takes place in , rather than in , where the original 1966 film was set. The film is about a womanizer who learns the hard way about the consequences of his romantic actions.

The music score was composed by Rolling Stone , former Eurythmic Dave Stewart, and , featuring 13 original songs and a remake of the original 1966 title song. Further songs are by and . [ [http://www.imdb.com/title/tt0375173/soundtrack Soundtracks for Alfie] at , accessed , .]

The film opens up by introducing Alfie (), a charismatic, charming, cool, cheerful, fashion-aware, bed-hopping, -riding who resides in . An impeccably stylish lad in his late twenties, Alfie funds his lifestyle by working as a driver for the local limousine service.

Meeting, romancing, and seducing women comes as second nature to Alfie. In addition to maintaining a casual relationship with a single mother named Julie () that he refers to as his "semi-permanent-quasi-sort-of-girlfriend thing", he also sleeps with various girls on the side, such as the married-yet-neglected-by-her-husband blond named Dorie () whom he regularly meets for sex after work in the back of his limo. At the first inkling Dorie may desire their liaison to grow into something more, he decides to stop all contact. Alfie ultimately views women as expendable, cutting them loose as soon as he feels they're starting to cramp his style.

Alfie's best friend Marlon () is also a limo driver in the same company. In addition to their friendship, the two are working on a plan that would eventually see them start their own business. However, for the moment, Marlon is preoccupied with trying to win back his ex-girlfriend Lonette () who dumped him after finding out he cheated, and is now, despite his desperate efforts, stubbornly unresponsive to his reconciliation attempts. At a loss for ideas, Marlon eventually turns to Alfie for help by having him put in a good word with Lonette. This takes place late one night following a closing shift in a bar where Lonette is waitressing. As the staff is closing up, Alfie is trying to persuade her to take Marlon back, however, the conversation soon goes in a different direction and eventually after a few drinks, they end up having passionate sex on the pool table. Alfie is terrified about facing his friend in the event he ever gets the word of what happened, but is amazed and relieved to be told by jubilant Marlon that Lonette got back with him the very next day after her "conversation" with Alfie.

Around the same time, as he arrives to Julie's place looking for another , Alfie is informed she no longer wants to see him since she found the proof of his infidelity (Dorie's red ). He seems to take it all in stride with a smile on his face as he disappears down her street. Alfie soon gets another unpleasant piece of news, this time from Lonette: she is pregnant with his child. Without telling Marlon, the two of them visit a clinic where she has an . Soon afterwards, Marlon and Lonette unexpectedly move upstate without even saying goodbye to Alfie.

Alfie is then faced with an erectile problem that causes him plenty of embarrassment in front of his next few female conquests. Following repeated failures to achieve an with various women, he visits a doctor who performs an examination and reassures him there's nothing wrong physically that would stand in his way of achieving one, thus writing his erectile problems off to "probably stress". However, it's not all good news as the same doctor locates a lump, indicating a possibility of . Alfie immediately runs a test at the clinic and spends a few anxious days awaiting the results. During one of his trips to the hospital, Alfie meets an older man named Joe (Dick Latessa) in the clinic bathroom. After a brief conversation during which he reveals he's a , Joe imparts some life advice to depressed Alfie: "Find somebody to love, and live every day like it's your last". This is followed by him offering his card to Alfie "in case he wants someone to talk to". Soon afterwards, Alfie finds out he doesn't have cancer.

Alfie takes the whole erection episode followed by a mortal health scare to heart and decides that "aiming higher" in his love life will be his new resolution. To that end, he picks up a beautiful young woman named Nikki () before , and they quickly embark on a passionate but turbulent relationship against the winter holidays backdrop. Soon after moving in together, Alfie is not happy about having to endure Nikki's wild mood swings and reckless behavior that occur as a result of her decision to go off her medication.

While beginning to distance himself emotionally from Nikki, he sets his sights on an older woman named Liz (), a sultry cosmetics mogul whom he meets in the company of an older man while driving them around. Although Alfie is clearly quite taken with her confident flair and high society ways, she, unlike many of the women in Alfie's life, seemingly displays no intent to move their relationship past the physical stage. Unsurprisingly, his infatuation with Liz serves as the final catalyst that leads to the end of his interest in Nikki, who soon moves out of his life.

Not long afterwards, a chance meeting with his ex Julie in a coffee shop renews his feelings for her. To his dismay, she's now happily involved with someone else, filling Alfie with feelings of regret over his years of thoughtless womanizing.

A trip upstate to visit his old friend Marlon and his now-wife Lonette reveals that she never actually went through with the abortion opting instead to give birth to Alfie's child. Alfie also learns that Marlon accepted the baby and cares for it now as though it's his biological child, all of which leaves Alfie feeling horrible.

Downcast and gloomy, Alfie digs up the number given to him by a man named Joe from the clinic bathroom and calls him up. Walking along the beach together, Joe imparts some words of encouragment to Alfie. He then turns to Liz for reassurance and comfort, but is crushed to discover that she has a new man in her life. Completely rattled, Alfie insists to know what her new boyfriend has that he doesn't, to which she, after some initial hesitation, simply states: "he's younger than you".

Shocked and dismayed by one blow after another, Alfie even looks up Dorie, his one-time regular booty call. They meet by the docks late one night, but at this point he is more interested in a shoulder to lean on than sex. She, however, informs him she's moved on, and, though cordial and polite, generally lets him know she wants no part of him anymore. The film ends with Alfie's monologue in which he begins to question his shallow self-indulgent lifestyle.

For the song "" and won the BFCA Award, , Sierra Award and the World Soundtrack Award.

has also denounced the movie since its release, stating in an August 2007 press conference to promote his film, "Sleuth" (incidentally another remake) that "When I was approached originally to work on the new version of "Alfie" it seemed like a brilliant idea because the original was so successful, but from my point of view it didn't quite turn out the way I wanted it to." [ [http://www.guardian.co.uk/uk/2007/aug/31/filmfestivals.film After Alfie, Jude Law tries another Caine role | UK news | The Guardian ] ]