The Little Red Riding Hood fairy tale has often been adapted into a wide variety of media.

Many of the above short stories and poems (as well as many older texts) are collected in The Trials and Tribulations of Little Red Riding Hood by Jack Zipes. 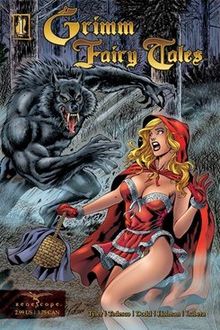 Little Red Riding Hood in one of a number of comic book adaptations. Art by Al Rio, published by Zenescope.

As Iðunn continues further down the path, wearing her crimson cloak and hood, Fenris the Wolf-God sees her, and transforms himself. Iduna next comes upon "a frail stranger". The stranger offers Iduna protection along her journey, but she declines the offer. The stranger takes a strong interest in Iduna's basket and begins asking her questions. She quickly grows suspicious, saying his hands seem so grasping -so brutal, and he has an odd voice, like the guttural snarl of a wild beast. She finds his manner sinister-frightening, and says his eyes burn with hatred-with pure savagery. She then discovers that the stranger is actually Fenris the Wolf God in disguise. Fenris shape shifts into his true form and attacks her. Haakun the Hunter arrives and drives Fenris away with his enchanted battle axe, causing the Wolf to shrink in an attempt to escape. The axe pursues Fenris and finally strikes him, spiriting him off to the shadowy land of Varinheim.