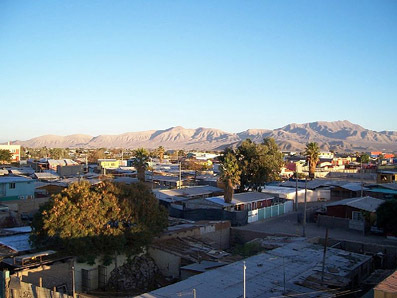 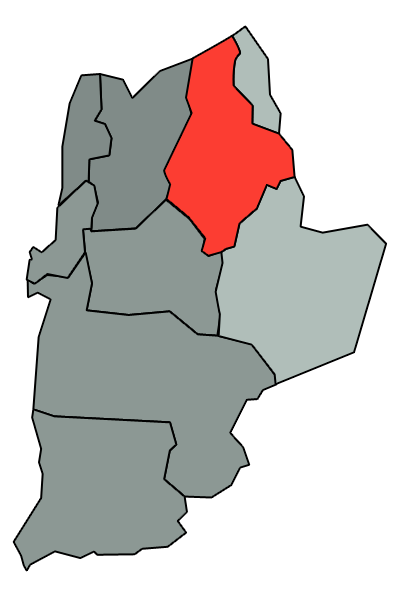 mapsize =100px
map_caption = The map of the Calama in the Antofagasta Region.

Calama is a city and commune in the in northern . It is the capital of , part of the . Calama is one of the driest cities in the world with average annual precipitation of just 5 mm (0.2 inches)Fact|date=March 2007. The , Chile's longest, flows through the city. Calama has a population of 143,000 ( ).

At an elevation of 2,400 metres (7,900 ft), Calama is the gateway to the geological and archaeological wonders of Chile’s high central desert. Some of these places of interest include: the town of , the village of , Valle de la Luna (Valley of the Moon), the volcano, , , the , the , the El Tatio Geysers, the village of .

In the nearby town of , by one of the largest open-pit copper mines in the world, was dismantled, partly because of environmental reasons, and partly due to encroachment from the mine's expansion. Residents of then moved to Calama, away from company-owned residences, to find housing on their own.

There are a variety of hypothesis with respect to the origin of the name "Calama," but the two main accounts maintain that its origin comes from the language , spoken in the past by the , an ethnic group that to this day resides in the .

Hector Pumarino Soto suggests that "Calama" stems from the word "Ckara-ama," which means "town in the middle of the water". This affirmation is supported by the fact that, until the middle of the 20th century, the urban site of Calama and the surrounding oasis were flanked by the (in its south and east borders) and the fertile plain and swamps of the western sector, creating a true island in the middle of the desert surrounded completely by water.

Emilio Vaïsse, meanwhile, says that Calama comes from the word "Ckolama," which means "place where s abound". This is supposed testimony to the abundance of such a bird, living over everything in the middle of the western swamp sector.

The exact evidence related to the history of Calama does exist, including s and the caves of Yalquincha (NE of the city), the chullpas of Topáter (pre-Columbian cemeteries to the east of the city), the Copper Mummy, and other remains in .

At the intersection of the Camino del Inca (the longitudinal one) and the routes that crossed the coast of the Altiplano, Calama became the main shelter of the Despoblado of Atacama. Their extensive lands for growing and give testimony of the high capacity to supply food to the troops of Chasquis and to give tribute to the . In fact, when , returning from , passed by the Calama shelter, the natives gave him copper horseshoes, which were made using a mysterious Incan technique used by towns conquered by the Incas. The science of such a technique still has yet to be explained, but the presence of such horseshoes further suggests strong Incan influence in Prehispanic times.

Spanish colonization obviously caused some changes; however, the hostile climate impeded establishment of greater control. These changes influenced the control of trade routes that crossed the desert and communication to the port of Cobija with the deposits of Potosí and the cattle farms of Salta and Tucumán. In this sense, Calama continued as a main point of provision for commercial routes. In the 18th century, with the , Calama depended directly of the Intendencia de Potosí.

After 's Declaration of Independence (6 August 1825), and with gradual changes in the administration of the territory, Calama remained constituted under the Departamento de Litoral (1829), subdivided in the Provincia de Lamar y la Provincia de Atacama (Cobija being the departmental capital). Calama was an important town in the Provincia de , through which traveled the weekly mail between Cobija and Salta-Potosí, since 1832. In 1840, the provincial capital transferred from Chiuchiu to Calama, increasing the communication boom.

The border conflicts between and did not reach either Calama or the Province of . The greater dispute concentrated in the central prairie and in the coast, where they began to discover rich deposits, , and . The ambiguity that led to the frontier conflicts was the possession of the central plain and the Atacama coast. The environment was made tense when Chilean , under the command of Emilio Sotomayor Baeza, disembarked and peacefully took the port of on the morning of February 14, 1879. Later, Bolivia declared war on Chile on March 1.

Since that day, the changes in the have been very deep. It being part of the administrative center of 2° order in , returned as one of 4° order under the Chilean administration (subdelegation). Recently in 1888, under the of , Calama returned as an administrative center of 3° order, inaugurated as the municipality on the 13th of October. Prior to that, in 1886, Calama was chosen for a railway station of the Antofagasta-Bolivia Railway, which further expedited shipments through Calama.

contains two distinct entities: the and the Mountain Range. Between convert|2000|m|ft|-2|abbr=on and convert|3000|m|ft|-2|spell=us, the climate is characterized by annual that does not surpass convert|75|mm|in. The is convert|11.2|°C throughout the (with drastic changes between daily highs of over convert|20|°C and daily lows below zero in and maximums of over convert|30|°C in .