Lynchburg is an independent city in the Commonwealth of Virginia. The population was 75,568 as of 2010.[3] Located in the foothills of the Blue Ridge Mountains along the banks of the James River, Lynchburg is known as the "City of Seven Hills" or "The Hill City." Lynchburg was the only major city in Virginia that did not fall to the Union in the American Civil War.

The Metropolitan Statistical Area of Lynchburg of 2,122 square miles (5,500 km2) is near the geographic center of Virginia and encompasses Amherst County, Appomattox County, Bedford County, Campbell County, City of Bedford, and the City of Lynchburg. It is the fifth largest MSA in Virginia with a population of 246,036.[4] Other nearby cities include Roanoke, Charlottesville, and Danville. Lynchburg's sister cities are Rueil-Malmaison, France and Glauchau, Germany.

Lynchburg ranks below the 2006 median annual household income for the U.S. as a whole, which was $48,200, according to the US Census Bureau.[3] 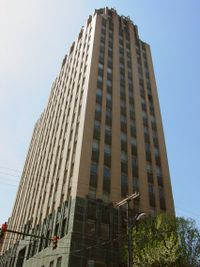 The Allied Arts Building in Downtown Lynchburg, completed in 1931

Lynchburg features a skilled labor force, low unemployment rate,[9] and below average cost of living. Of Virginia's larger metro areas, Forbes Magazine ranked Lynchburg the 5th best place in Virginia for business in 2006, with Virginia being the best state in the country for business.[10] Only 6 places in Virginia were surveyed and most of Virginia’s cities were grouped together by Forbes as "Northern Virginia". Lynchburg achieved the rank 109 in the whole nation in the same survey.

Industries within the Lynchburg MSA include nuclear technology, pharmaceuticals and material handling. A diversity of small businesses with the region has helped maintain a stable economy and minimized the downturns of the national economy.[11][12] Reaching as high as 1st place (tied) in 2007, Lynchburg has been within the Top 10 Digital Cities survey for its population since the survey's inception in 2004.

The Lynchburg News & Advance reports that while more people are working than ever in greater Lynchburg, wages since 1990 have not kept up with inflation. Central Virginia Labor Council President Walter Fore believes this is due to lack of white-collar jobs. According to the Census Bureau, adjusted for inflation, 1990 median household income was about $39,000 compared to 2009 median household income of $42,740. As of 2009 Forbes has named Lynchburg as the 70th best metro area for business and careers, ahead of Chicago and behind Baton Rouge. The reason for the decent ranking was due to the low cost of living and low wages in Lynchburg. In other areas, the region didn’t come in as strong. It ranked at 189 for cultural and leisure and at 164 for educational attainment.[13]

Virginia Business Magazine reports that Young Professionals in Lynchburg recently conducted a study that clearly showed how much of its young workforce has been lost.[14]

A part of Monacan country upon the arrival of English settlers in Virginia, the region had traditionally been occupied by them and other Siouan Tutelo-speaking tribes since ca. 1270, driving Virginia Algonquians eastward. Explorer John Lederer visited one of the Siouan villages (Saponi) in 1670, on the Staunton River at Otter Creek, southwest of the present-day city, as did Batts and Fallam in 1671. The Siouans occupied the area until c. 1702, when it was taken in conquest by the Seneca Iroquois. The Iroquois ceded control to the Colony of Virginia beginning in 1718, and formally at the Treaty of Albany in 1721.

First settled in 1757, Lynchburg was named for its founder, John Lynch, who at the age of 17 started a ferry service at a ford across the James River to carry traffic to and from New London. He was also responsible for Lynchburg's first bridge across the river, which replaced the ferry in 1812. He and his mother are buried in the graveyard at the South River Friends Meetinghouse. The "City of Seven Hills" quickly developed along the hills surrounding Lynch's Ferry. Thomas Jefferson maintained a home near Lynchburg, called Poplar Forest. Jefferson frequented Lynchburg and remarked "Nothing would give me greater pleasure than to be useful to the town of Lynchburg. I consider it as the most interesting spot in the state."

Lynchburg was established by charter in 1786 at the site of Lynch's Ferry on the James River. These new easy means of transportation routed traffic through Lynchburg, and allowed it to become the new center of commerce for tobacco trading. In 1810, Jefferson wrote, "Lynchburg is perhaps the most rising place in the U.S.... It ranks now next to Richmond in importance..." Lynchburg became a center of commerce and manufacture in the 19th century, and by the 1850s, Lynchburg (along with New Bedford, Mass.) was one of the richest towns per capita in the U.S.[15] Chief industries were tobacco, iron and steel. Transportation facilities included the James River Bateau on the James River, and later, the James River and Kanawha Canal and, still later, four railroads, including the Virginia and Tennessee Railroad and the Norfolk and Petersburg Railroad.

Early on, Lynchburg was not known for its religiosity. In 1804, evangelist Lorenzo Dow wrote of Lynchburg "... where I spoke in the open air in what I conceived to be the seat of Satan's Kingdom. Lynchburg was a deadly place for the worship of God." This was in reference to the lack of churches in Lynchburg. As the wealth of Lynchburg grew, prostitution and other "rowdy" activities became quite common and, in many cases, ignored, if not accepted, by the "powers that be" of the time. Much of this activity took place in an area of downtown referred to as the "Buzzard's Roost[citation needed]."

During the American Civil War, Lynchburg, which served as a Confederate supply base, was approached within 1-mile (1.6 km) by the Union forces of General David Hunter as he drove south from the Shenandoah Valley. Under the false impression that the Confederate forces stationed in Lynchburg were much larger than anticipated, Hunter was repelled by the forces of Confederate General Jubal Early on June 18, 1864, in the Battle of Lynchburg. To create the false impression, a train was continuously run up and down the tracks while the citizens of Lynchburg cheered as if reinforcements were unloading. Local prostitutes took part in the deception, misinforming their Union clients of the large number of Confederate reinforcements.

From April 6–10, 1865, Lynchburg served as the Capital of Virginia. Under Gov. William Smith, the executive and legislative branches of the commonwealth moved to Lynchburg for the few days between the fall of Richmond and the fall of the Confederacy.

In the latter 19th century, Lynchburg's economy evolved into manufacturing (sometimes referred to as the "Pittsburgh of the South") and, per capita, made the city one of the wealthiest in the United States. In 1880, Lynchburg resident James Albert Bonsack invented the first cigarette rolling machine, and shortly thereafter Dr. Charles Browne Fleet, a physician and pharmacological tinkerer, introduced the first mass marketed over-the-counter enema. About this time, Lynchburg was also the preferred site for the Norfolk & Western junction with the Shenandoah Valley Railroad. However, the citizens of Lynchburg did not want the junction due to the noise and pollution it would create. Therefore, it was located in what would become the City of Roanoke.

In the late 1950s, a number of interested citizens requested the federal government to change its long-planned route for the interstate highway now known as I-64 between Clifton Forge and Richmond.[16] Since the 1940s, maps of the federal interstate highway system depicted that highway taking a northern route, with no interstate highway running through Lynchburg.[17] The state highway commission's minutes reflected its approval of the northern route.[18] Although the proponents of a southern route succeeded in persuading a majority of Virginia Highway Commissioners to support the change after a study, in July 1961 Governor Lindsay Almond and U.S. Secretary of Commerce Luther Hodges announced that the route would not be changed.[19] This left Lynchburg as the only city with a population in excess of 50,000 (at the time) not served by an interstate.[20]

For several decades throughout the mid-20th century, the state of Virginia authorized compulsory sterilization of the mentally retarded for the purpose of eugenics. The operations were carried out at the Virginia State Colony for Epileptics and Feebleminded, now known as the Central Virginia Training School, located just outside Lynchburg. An estimated 8,300 Virginians were sterilized and relocated to Lynchburg, known as a "dumping ground" of sorts for the feeble-minded, poor, blind, epilectic, and those otherwise seen as genetically "unfit".[21]

Carrie Buck, the plaintiff in the United States Supreme Court case Buck v. Bell, was sterilized after being classified as "feeble-minded", as part of the state's eugenics program while she was a patient at the Lynchburg Colony for Epileptics and Feebleminded.

The story of Carrie Buck's sterilization and the court case was made into a television drama in 1994, Against Her Will: The Carrie Buck Story.

"Virginia State Epileptic Colony," a song by the Manic Street Preachers on their 2009 album 'Journal For Plague Lovers,' addresses the state's program of eugenics.

Over 40 sites in Lynchburg are listed on the National Register of Historic Places.[22]

The GLTC has selected a property directly across from Lynchburg-Kemper Street Station as its top choice of sites upon which to build the new transfer center for their network of public buses. They are interested in facilitating intermodal connections between GLTC buses and the intercity bus and rail services which operate from that location. The project is awaiting final government approval and funding, and is expected to be completed around 2013.[23] 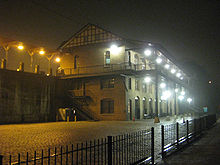 Intercity passenger rail and bus services are based out of Kemper Street Station, a historic, three-story train station recently restored and converted by the city of Lynchburg to serve as an intermodal hub for the community. The station is located at 825 Kemper Street.[24]

Greyhound Lines located their bus terminal in the main floor of Kemper Street Station following its 2002 restoration.[24] Greyhound offers transport to other cities throughout Virginia, the US, Canada, and Mexico. 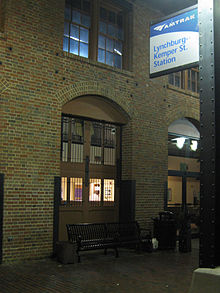 Also, Lynchburg has two major freight railroads. CSX Transportation has a line and a small yard in the city. Lynchburg is also a crossroad of two Norfolk Southern lines. One being the former mainline of Southern Railway, upon which Kemper Street Station is situated. NS has a classification yard located next to the shopping mall. Various yard jobs can be seen. Railfans who wish to visit the NS Lynchburg yard are advised to inquire with an NS official.

Lynchburg Regional Airport is solely served by US Airways Express to Charlotte. US Airways Express is the only current scheduled airline service provider. In recent months air travel has increased with 7,400 passengers flying in and out of the airport in April 2009—an increase of 97%.

Primary roadways include U.S. Route 29, U.S. Route 501, U.S. Route 221, running north-south, and U.S. Highway 460, running east-west. While not served by an interstate, much of Route 29 has been upgraded to interstate standards and significant improvements have been made to Highway 460.

In a Forbes Magazine survey, Lynchburg ranked very poorly when it comes to culture. It ranked at 189 for cultural and leisure out of 200 cities surveyed.[13]

The following attractions are located within the Lynchburg MSA:

Lynchburg is home to sporting events and organizations including:

The first neighborhoods of Lynchburg developed upon seven hills adjacent to the original ferry landing. These neighborhoods include:

Notable residents of Lynchburg include: