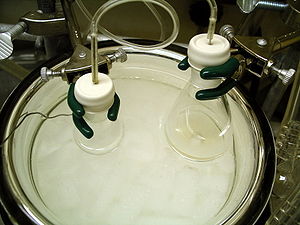 A typical experimental setup for an aldol reaction. Both flasks are submerged in a dry ice/acetone cooling bath (−78 °C) the temperature of which is being monitored by a thermocouple (the wire on the left).

A cooling bath is a mixture used in a laboratory when low temperatures are needed, for example to conduct low-temperature chemical reactions (such as when kinetic control of the reaction is desired), to collect highly volatile liquids from distillation, or in cold traps. It usually consists of a solid that melts or sublimes at a low temperature, or a liquid that boils at a low temperature, mixed with some other substance that modulate the temperature of the bath or improve heat conduction.

The simplest and cheapest cooling bath is an ice/water mixture, which maintains a temperature of 0 °C. For lower temperatures, three main types of cooling baths are typical:

A slurry of ice and an inorganic salt such as sodium chloride or calcium chloride can provide temperatures down to about −40 °C. The temperature depends on the amount and type of salt used, based on the freezing point depression effect.

A slurry of dry ice and a suitable organic solvent, such as acetone, can provide temperatures down to about −100 °C (with diethyl ether). Temperatures in the range of -12 °C to -78 °C can be conveniently generated with ethylene glycol / ethanol / dry ice mixtures.[1]

Liquid nitrogen can provide temperatures down to about its boiling point of −196 °C.

Several factors influence the choice of the cooling bath composition. The first is availability — dry ice and liquid nitrogen are comparatively inexpensive, but dry ice is often more easily stored.

The toxicity and flammability of the composition is significant. For example, many of the solvents used with dry ice are flammable. This problem is mitigated because at the working temperatures, the vapor pressures of most of these solvents is non-hazardous.[2] In most cases, a relatively non-toxic solvent such as acetone or isopropyl alcohol will be preferred, rather than something more toxic like bromomethane. When the cooling bath is no longer needed, the waste solvents also need to be stored and disposed of.

Liquid nitrogen is usually considered the best cooling bath refrigerant because it is non-toxic, is cheap, and leaves no residue. However, it suffers from the drawback of being cold enough to condense oxygen from the air into a liquid. The combination liquid oxygen and liquid organic solvents (oxygen with a boiling point of −182.95 °C) is a potentially explosive mixture that must be avoided.[2]