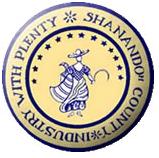 Shenandoah County is a county located in the &mdash; officially, "Commonwealth" &mdash; of . It is part of the region of the Virginia. As of the 2000 census, the population was 35,075. Its is WoodstockGR|6.

Shenandoah County was established in 1772, it was originally named Dunmore County for Virginia Governor . The county was renamed Shenandoah in 1778, named for the Indian tribe. During the Civil War the took place , .