Isle of the Dead (painting)

Isle of the Dead (painting) 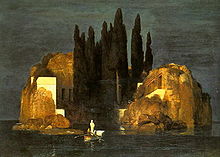 Isle of the Dead (German: Die Toteninsel) is the best known painting of Swiss Symbolist artist Arnold Böcklin (1827–1901). Prints of the work were very popular in central Europe in the early 20th century — Vladimir Nabokov observed that they were to be "found in every Berlin home."[1] Freud, Lenin, and Clemenceau all had prints of it in their offices.

Böcklin produced several different versions of the mysterious painting between 1880 and 1886.

All versions of Isle of the Dead depict a desolate and rocky islet seen across an expanse of dark water. A small rowboat is just arriving at a water gate and seawall on shore.[2] An oarsman maneuvers the boat from the stern. In the bow, facing the gate, is a standing figure clad entirely in white. Just behind the figure is a white, festooned object commonly interpreted as a coffin. The tiny islet is dominated by a dense grove of tall, dark cypress trees — associated by long-standing tradition with cemeteries and mourning — which is closely hemmed in by precipitous cliffs. Furthering the funerary theme are what appear to be sepulchral portals and windows penetrating the rock faces.

Böcklin himself provided no public explanation as to the meaning of the painting, though he did describe it as “a dream picture: it must produce such a stillness that one would be awed by a knock on the door.”[3][4] The title, which was conferred upon it by the art dealer Fritz Gurlitt in 1883, was not specified by Böcklin, though it does derive from a phrase in an 1880 letter he sent to the painting’s original commissioner.[5] Not knowing the history of the early versions of the painting (see below), many observers have interpreted the oarsman as representing the boatman Charon who conducted souls to the underworld in Greek mythology. The water would then be either the River Styx or the River Acheron and his white-clad passenger a recently deceased soul transiting to the afterlife.

Isle of the Dead evokes, in part, the English Cemetery in Florence, Italy, where the first three versions were painted. The cemetery was close to Böcklin's studio and was also where his infant daughter Maria was buried. (In all, Böcklin lost 8 of his 14 children.)

The model for the rocky islet was likely Pondikonisi, a small island near Corfu which is adorned with a small chapel amid a cypress grove.[6] (Another, less likely candidate is the island of Ponza in the Tyrrhenian Sea.)

Böcklin completed the first version of the painting in May 1880 for his patron Alexander Günther, but kept it himself. In April 1880, while still working on it, Böcklin's Florence studio had been visited by Marie Berna (widow of financier Dr.Georg von Berna [1836-65] and soon-to-be wife of the German politician Waldemar, Count of Oriola [1854-1910]). She was struck by the first version of this "dream image" (now in the Kunstmuseum Basel), which sat half completed on the easel, so Böcklin painted a smaller version on wood for her (now in the Metropolitan Museum in New York City). At Berna's request, he added the coffin and female figure, in allusion to her husband's death of diphtheria years earlier. Subsequently, he added these elements to the earlier painting. He called these works Die Gräberinsel ("Tomb Island").[7] (Sometimes the "Basel" version is credited as the first one, sometimes the "New York".)

The third version was painted in 1883 for Böcklin’s dealer Fritz Gurlitt. Beginning with this version, one of the burial chambers in the rocks on the right bears Böcklin's own initials: "A.B.". (In 1933, this version was put up for sale and a noted Böcklin admirer, Adolf Hitler, acquired it. He hung it first at the Berghof in Obersalzberg and, then after 1940, in the New Reich Chancellery in Berlin. It is now at the Alte Nationalgalerie, Berlin.)

Financial imperatives resulted in a fourth version in 1884, which was ultimately acquired by the entrepreneur and art collector Baron Heinrich Thyssen and hung at his Berliner Bank subsidiary. It was burned after a bomb attack during World War II and survives only as a black-and-white photograph.

A fifth version was commissioned in 1886 by the Museum of Fine Arts, Leipzig, where it still hangs.

Works inspired by Isle of the Dead