A coat of plates is a form of torso armour consisting of metal plates sewn or riveted inside a cloth or leather garment. 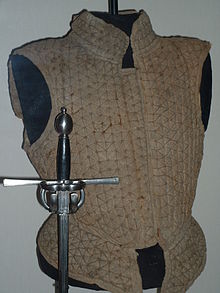 16th century Jack of plate consisting of iron plates sewn to a leather jerkin. "Jack" was a late-medieval name for jacket.

The coat of plates makes a fairly brief appearance in the history of European armour during the era of transitional armour, during a portion of the 14th century. The coat of plates was normally worn with a mail hauberk and a helmet.

The plates number anywhere from eight or ten to the hundreds depending on their size. The plates overlap but usually only enough to guarantee full coverage even when moving around and fighting. The coat of plates is similar to several other armours such as lamellar, scale and brigandine. Unlike scale armour which has plates on the outside or splint armour in which plates can be inside or outside, a coat of plates has the plates on the inside of the foundation garment. It is generally distinguished from a brigandine by having larger plates, though there may be no distinction in some examples.

The coat of plates is known amongst the history re-enactors as Visby armour[citation needed] due to archaeological findings of this type of armour in Visby, Sweden. One of the best resources about coats of plates are the mass graves from the Battle of Visby. The Visby coats of plates display between 8 and some 600 separate plates fastened to their backings.[1] The mass grave from a battle in 1361 has yielded a tremendous number of intact armour finds including 24 distinct patterns of coat of plates style armour. Many of these were older styles similar to the armoured surcoat discussed below.

Coat of plates armor (along with lamellar) is also seen among the terra cotta army - soldiers representative of the Qin Dynasty. 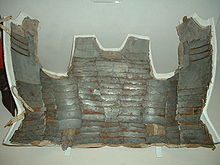 Inside view of an Italian brigandine dated 1470

The coat of plates likely developed from the armoured surcoat, such as seen on the 1250 St. Maurice coat.[1] These consisted of metal plates rivetted to the inside of a surcoat. The plates did not overlap but the armour is otherwise similar. This type of armour is also documented in Norse written sources from around 1250: Tbe Konungs skuggsjá calls it a Briost Bjorg and specifies that is should cover the area between the nipples and the belt, and the later Hirdskraa of the 1270s calls it a Plata. The former source informs us that the armour should be worn beneath the hauberk, which can explain why this form of armour so seldom appears in illustrations and statuary before the late 13th century.

This armor was improved in the 15th century, being altered to resemble a contemporary doublet. This version of the coat of plates, studded with rivets, was known as a brigandine. The name is derived from "brigand," the name for a common soldier, many of whom would become bandits to survive after the war ended.[2]

The coat or Jack of plates remained in use until the end of the 16th century. It was identical to contemporary brigandines although the metal plates were sewn in place rather than riveted. Jacks were often made from recycled pieces of older plate armor, including damaged brigandines and cuirasses cut into small squares[3] Although the coat of plates was obsolete by the time of the English Civil War many were taken to the New World by the Pilgrim Fathers as they provided excellent protection from Indian arrows; one dating back to 1607 was recently found at Jamestown.[4]