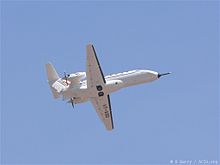 National Aerospace Laboratories (NAL), is India's second largest aerospace firm after Hindustan Aeronautics (HAL). It was established by the Council of Scientific and Industrial Research (CSIR) at Delhi in 1959 and its headquarters was later moved to Bangalore in 1960. The firm closely operates with HAL, DRDO and ISRO and has the prime responsibility of developing civilian aircraft in India.

NAL is a high technology oriented institution concentrating on advanced topics in the aerospace and related disciplines. Originally started as National Aeronautical Laboratory, it was renamed National Aerospace Laboratories to reflect its major involvement in the Indian space programme, its multidisciplinary activities and global positioning. It is India’s only civilian aerospace laboratory with a high level of competence and the expertise of its scientists is globally acknowledged. [1]

NAL employs a staff of about 1300 with about 350 full-fledged R&D professionals. NAL is equipped with facilities such as the Nilakantan Wind tunnel Centre and a computerised fatigue test facility. NAL also has facilities for investigating failures and accidents in aerospace.

CSIR has approved Rs 300 crore ($75 million) to design an aeroplane that can carry 70 passengers on short flights, and compete with planes of Franco-Italian aircraft maker ATR in Indian skies. The project will be called RTA-70. NAL would use the money to design a digital concept plane in around two years. The money will also be used to improve infrastructure at the lab. Once additional funding for the Rs. 2,000 crore project and its partners are firmed up, a prototype would be built and flown in four years. The first prototype would be a 70-seat plane. It is a family of aircraft that NAL is designing and will have three variants, a 70-seater, a 50-seater and an extended 90-seater version to be called RTA-90 with option of both Turbo prop and Turbo Fan as power source.[1]