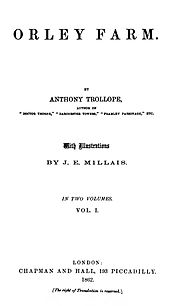 Title page from the first edition in book form.

Orley Farm is a novel written in the realist mode by Anthony Trollope (1815–82), and illustrated by the Pre-Raphaelite artist John Everett Millais (1829–96). It was first published in monthly shilling parts by the London publisher Chapman and Hall. Although this novel appeared to have undersold (possibly because the shilling part was being overshadowed by magazines, such as The Cornhill, that offered a variety of stories and poems in each issue), Orley Farm became Trollope's personal favourite.[1] The house in the book became a school, which was originally supposed to be the feeder school to Harrow School. This is called Orley Farm, which Trollope allowed to be named after his book (www.orleyfarm.harrow.sch.uk)

This passage from the school website reads: In 1851 the school transferred to a house called "Sunnyside" in Sudbury Hill and began taking boarders, then in the late 1850s, Edward Hastings purchased an additional house, "Julians". Unbeknown to him, this property had previously belonged to the family of Anthony Trollope, and when that author faithfully described it in his famous novel of 1862, "Orley Farm", Hastings recognised the description and sought – and gained – the author's permission to change the name of his school to Orley Farm.

Orley Farm was first published in monthly shilling parts by the London publisher Chapman and Hall from March 1861 to October 1862. Each part comprised two illustrations that were situated at the front, and two to three chapters that followed. The first volume, also published by Chapman and Hall, appeared in October 1861, before the novel's serialization was completed. Upon completion in 1862, the second volume was produced.

When Joseph Mason of Groby Park, Yorkshire, died, he left his estate to his family. A codicil to his will, however, left Orley Farm (near London) to his much younger second wife and infant son. The will and the codicil were in her handwriting, and there were three witnesses, one of whom was no longer alive. A bitterly fought court case confirmed the codicil.

Twenty years pass. Lady Mason lives at Orley Farm with her adult son, Lucius. Samuel Dockwrath, a tenant, is asked to leave by Lucius, who wants to try new intensive farming methods. Aggrieved, and knowing of the original case (John Kenneby, one of the codicil witnesses, had been an unsuccessful suitor of his wife Miriam Usbech), Dockwrath investigates and finds a second deed signed by the same witnesses on the same date, though they can remember signing only one. He travels to Groby Park in Yorkshire, where Joseph Mason the younger lives with his comically parsimonious wife, and persuades Mason to have Lady Mason prosecuted for forgery. The prosecution fails, but Lady Mason later confesses privately that she committed the forgery, and is prompted by conscience to give up the estate.

There are various subplots. The main one deals with a slowly unfolding romance between Felix Graham (a young and relatively poor barrister without family) and Madeline Staveley, daughter of Judge Stavely of Noningsby. Graham has a long-standing engagement to the penniless Mary Snow, whom he supports and educates while she is being “moulded” to be his wife.

Between the Staveleys at Alston and Orley Farm at Hamworth lies the Cleve, where Sir Peregrine Orme lives with his daughter-in-law, Mrs. Orme, and grandson, Peregrine. Sir Peregrine falls in love with Lady Mason and is briefly engaged to her, but she calls off the match when she realises the seriousness of the court case.

Meanwhile, Mr. Furnival, another barrister, befriends Lady Mason, arousing the jealousy of his wife. His daughter, Sophia, has a brief relationship with Augustus Stavely and a brief engagement to Lucius Mason. Eventually Furnival and his wife are reconciled, and Sophia's engagement is dropped. Sophia is portrayed as an intelligent woman who writes comically skillful letters.

A major theme of Orley Farm is the question of individual judgment versus group judgment. Augustus Staveley purports to advise Felix Graham that a person must allow oneself "to be governed by the united wisdom of others" rather than to take it upon oneself to "judge as to every step by his own lights." Trollope calls this advice into question. Similarly, a comic minor character, Mr. Moulder, defends Lady Mason's acquittal thus: "If a jury of her countrymen doesn't make a woman innocent, what does?"[2]

A darker theme, also seen in Trollope's other books such as Castle Richmond and Framley Parsonage, is that the changing Victorian world often brought anguish and disillusionment to those who had started out with great advantages.[3] Another theme, which recurs often throughout Trollope's works, is the threat of the loss of a house.[4]

Trollope has made a few comments over the background and his regard to Orley Farm. In Book IX of his autobiography, Trollope says, "The plot of Orley Farm is probably the best I have ever made; but it has the fault of declaring itself, and thus coming to an end too early in the book." He continues by admitting, "When Lady Mason tells Sir Peregrine that she did forge the will, the plot of Orley Farm has unraveled itself; - and this she does in the middle of the tale."