Many military leaders played a role in the American Revolutionary War. This list is a compilation of some of the most important leaders among all of the many participants in the war. In order to be listed here, an individual must satisfy one of the following criteria:

When the war began, the American colonists did not have a regular army (also known as a "standing army"). Each colony had traditionally provided for its own defenses through the use of local militia, which had their own command hierarchy. Some states, most notably Pennsylvania and Massachusetts, also had their own navies. 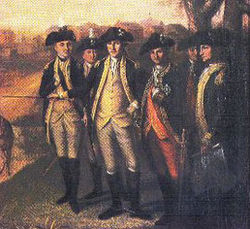 Detail from Washington and his generals at Yorktown (c. 1781) by Charles Willson Peale. Lafayette (far left) is at Washington's right, the Comte de Rochambeau to his immediate left.

Operating out of France

At the head of the British forces was the king, who was captain general of all forces both naval and military. It was usual for him to delegate his military powers as captain general or commander-in-chief. From 1772 to 1778 the office was vacant, but from 1778 to 1782 Sir Jeffery Amherst officiated as Commander-in-Chief with the title of General on the Staff. He was succeeded in February, 1782 by Henry Seymour Conway.

Next in importance to the Commander-in-Chief was the Secretary at War, who served as head of the War Office, and was bidden "to observe and follow such orders and directions as he should from time to time receive from the king or the general of the forces". Not until 1783 was he a minister responsible to parliament. At the start of part of the war the secretary was Lord Barrington. He was replaced in 1778 by Charles Jenkinson, 1st Earl of Liverpool who held this position until the fall of Lord North's government.

Commander-in-Chief of the Forces

Until the war was widened into a global conflict by France's entry into the war in 1778, the war's military activities where primarily directed by the Commander-in-Chief, North America. 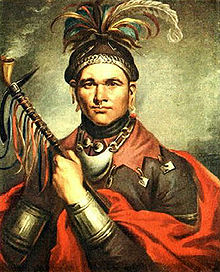 Great Britain hired the services of military troops from a number of German principalities of the Holy Roman Empire. The largest number arrived in 1776 pursuant to agreements signed in late 1775 or early 1776, but additional forces were recruited in 1778, with only limited success. The single largest contingent came from Hesse-Kassel.

The Dutch Republic played a significant economic role in the war, but its military participation was limited, in part due to internal political divisions.