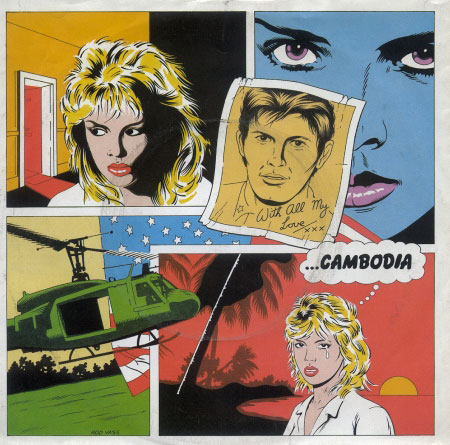 "Cambodia" is the fourth single by British singer . It was released at the end of 1981; a year in which Wilde had already scored three highly successful hit singles and a best-selling debut album. It is regarded as one of her classic songs.

The single was another international success, topping the charts in , and and hitting the Top 10 in several other nations. It was released on the 7" format but also as a 12" single in , although not in a remixed or extended version. The B-side of both releases was an exclusive non-album track called "Watching For Shapes".

"Cambodia" was later included on Wilde's second original album, "Select" and was followed by a more uptempo, instrumental version of the song with the title "Reprise".

Musically and lyrically, "Cambodia" showed a change in direction for Wilde from the New Wave feel of her debut album. The song was mainly synth-driven, with oriental-sounding percussion. The lyrics, telling the story of a -based wife whose husband mysteriously disappears after flying out to and never returns, are inspired by some of the tragedies that occurred in . In writing the lyrics, imagined an American pilot flying in a and getting shot down by a surface-to-air missile. In fact, the "Reprise" track was originally intended to include sound of jet engines followed by the sound of a rocket blowing the Phantom up, but the sleeve of the single showed a featuring helicopters, so these sounds had to be replaced.

* 's 2005 album "" includes a cover version of "Cambodia".
* The Swedish Death'N'Roll band Hearse released a cover of the song in 2004 on their album .
* The German group Scooter covered the song on their 2007 album "".
* In n punk rock band Six Pack recorded a version on their cover album "Discover".