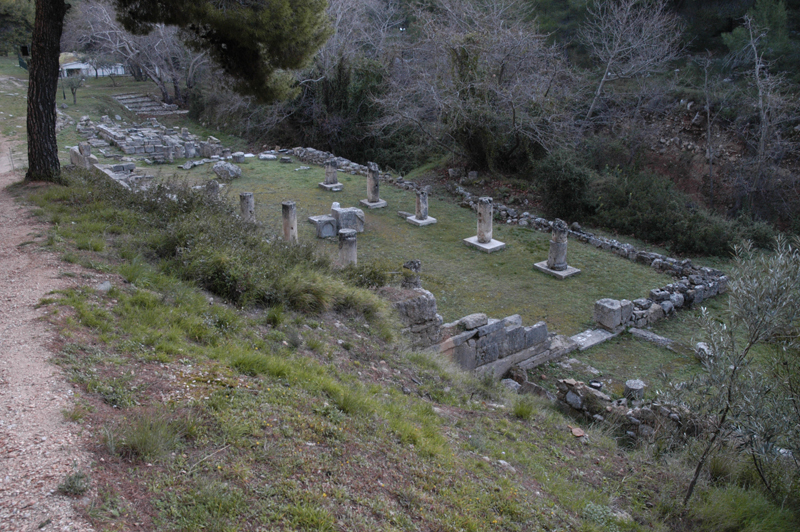 caption_skyline = View of the Temple of "Amphiaraos".
country =
region =
elevation = 154
controlling_city =
peak_period = to Roman
lat_deg = 38
lat_min = 17
lat_sec = 29.00
lat_hem = N
lon_deg = 23
lon_min = 50
lon_sec = 43.93
lon_hem = EThe "Amphiareion" of Kalamos (Greek: Άμφιαρείον Καλάμου), situated in the hills 6 km southeast of the fortified port of , was a sanctuary dedicated in the late fifth century BCE to the hero Amphiaraos, where pilgrims went to seek oracular responses and healing. It became particularly successful during the fourth century, to judge from the intensive building at the site. [V.C. Petrakos 1968:68-70, noted by Eran Lupu, "Sacrifice at the Amphiareion and a Fragmentary Sacred Law from Oropos", "Hesperia" 72.3 (July 2003:321-340).] The hero Amphiaraos was a descendant of the seer Melampos and initially refused to participate in the attack on Thebes (detailed in the of ) because he could foresee that it would be a disaster. [ The Roman poet wrote an epic poem on this myth in the 1st century CE. ] In some versions of the myth, [, Ninth Nemean Ode.] the earth opens and swallows the chariot of Amphiaraos, transforming him into a hero. [Pausanias 1.34.2 ]

The sanctuary is located 37.2 km NNE of Athens [The site is described for the non-specialist by E. Melas, in "Temples and Sanctuaries of Ancient Greece: A Companion Guide", Melas, editor, (London: Thames & Hudson) 1973.] at a sacred spring; it contained a temple of Amphiaraos (with an ic cult statue), as well as a theater, a , and associated structures. The "" extended for some 240 metres northeast from the Temple of Amphiaraos (hence "Amphiareion") along a streambed. The cult, which was both public and private, dates to the fifth century BCE, [Two fragmentary fourth-century inscriptions of sacred laws reflecting the ritual and votive reliefs (Eran Lupu 2003) supplement Pausanias' description of the incubation, practiced in the second century CE by incubation on a sacrificed ram's fleece.] and there was an upswing in the sanctuary’s reputation as a healing site during the plague that hit Athens in the late 5th BCE. relates that the oracular response of this shrine was one of only two correct answers to the test put to them all by the Lydian king "". [ "Histories", 1.47-49: Croesus asks what he will be doing on a predetermined day. The oracle answered correctly that he would be boiling a tortoise and a lamb in a bronze pot with a bronze lid. ] There were many dedications from Greeks, notable Romans, and others, many with inscriptions. [ In Histories, 1.92.2, Herodotus says that "Croesos" made a dedication at the "Amphiareion". ] On the southeast side of the streambed there are extensive remains of domestic structures as well as an unusually well-preserved "klepsedra" (water clock).

At the Amphiareion, in addition to the presumed annual festival, Greater Amphiareia were celebrated in an agonistic festival of athletic games, every fifth year. Two reliefs of the late fifth-early fourth century seem to provide the earliest attestations of the festival games; there is an inscribed catalogue of victors at the Greater Amphiareia that dates before 338 BCE. [Lupu 2003:322 note 5]

Amphiaraos was also worshiped at the site of about 17.5 km southeast, as well as at Athens, Argos, Sparta, and other sites. The cult at the "Amphiareion" came to an end with the outlawing of non-Christian worship in the s at the end of the fourth century CE.

In 414 BCE produced a comedy, "Amphiaraos", of which fragments survive as quotations. [A.B. Petropoulou, "The Eparche documents and the early oracle at Oropus" "Greek, Roman and Byzantine Studies" 22 (1981:57f).]

At the Temple of "Amphiaraos", the site is about 154 m in elevation, with a gentle slope to the northeast, as it fills the northwest bank of a small ravine between two hills. The sanctuary was located near the border of Attica and Boiotia, the respective spheres of control of Athens and Thebes; control over the site passed back and forth between the rival cities until destroyed Thebes in 335 BCE. In the 2nd century CE, the Greek periegetic writer Pausanias stated:

I think that "Amphiaraos" most of all dedicated himself to interpreting dreams: it is clear that, when he was considered a god, he set up an oracle of dreams. And the first thing is to purify oneself, when someone comes to consult "Amphiaraos", and the purification ritual is to sacrifice to the god, and people sacrifice to him and to all those whose names are on (the altar), and - when these things are finished – they sacrifice a ram and spread out its skin under themselves, lie down waiting for the revelation of a dream.

An inscription from the site, however, states that each man may sacrifice what he wants. Some variation in practice during the nine centuries of cult activity at the sanctuary may be expected. The baths of the site were famous in antiquity. The locations of a stadion and a are unknown.

The early 4th century BCE temple of "Amphiaraos" was of an unusual Doric in antis plan: i.e. it has six columns across the front façade between small projecting walls. The antae were capped with half columns, giving the appearance of an façade. It measures 14 by 28 m. Behind the columns was a , leading into a with two rows of five un-fluted internal columns. Alongside the second pair of columns back from the pronaos there was a base for the cult statue of "Amphiaraos" of which one arm remains "in situ". In the rear wall of the cella, there was a threshold, perhaps a later addition.

On axis with the center line of the temple, and about 10.5 m northeast, are the remains of the altar divided into sections with inscriptions to a number of gods and heroes. [ Pausanias (1.34.3) says that the altar was dedicated to five groups:
* Heracles, Zeus and Apollo the Healer (Παιών)
* Heroes and heroes’ wives
* Hestia, Hermes, Amphiaraos, and of the children of Amphiaros,
* Aphrodite, Panacea ("all-cure"), Iaso, , and Athena the Healer (Παιωνία)
* Nymphs and Pan; the rivers and .

Wrapping around the altar on the west side is a stepped structure that may have served as an early theatral area before the construction of the theater. Immediately to the east is the sacred spring, where Pausanias says worshipers threw coins when they were healed of a disease. [Pausanias, 1.34.4 ] Immediately northeast of the spring is the structure traditionally called the men’s bath.

The theater is dated to the 2nd century BCE by inscriptions and the seating area was likely composed of wooden seats on stone supports. Five marble "prohedria" (seat of honor at the front of the seating area) were discovered placed around the orchestra, which had a radius of 12.4 m. Two "parodoi" (side entryways) led off from the orchestra between the seating area of the "" and the stage building. The Doric order "proscaenium" of the stage structure (c. 12 m wide) is well preserved and thus important for the study of theater design. The theater would have held approximately three hundred spectators.

Dating to the mid-4th century BCE, the stoa measured 11 by 110 m with 39 exterior Doric columns and 17 internal Ionic columns. [ The stoa is dated by the shape of the Doric capitals. ] There were stone benches set into the back walls of the structure, perhaps where the suppliants of the god slept and awaited their dreams. The sexes may have been segregated as may have been the case for the bath to the northeast of the stoa, which is traditionally called the women’s bath.

On the southeast side of the streambed opposite the sacred spring are the remains of an unusually well-preserved "klepsedra" (water clock). This instrument is important in the study of ancient methods of timekeeping in that it is an example of an inflow water clock. Since an inflow clock measures time by the filling of a known volume from a constant rate of inflow, it is much more accurate than an outflow water clock in measuring the gradations between full and empty. [ An outflow water clock has a rate of outflow that is dependent on the mass of water remaining in the reservoir; the less water remains, the slower is the outflow. ] The klepsedra was composed of a central, square reservoir with a steep stairway on the south side to allow access to the bronze plug at the bottom of the reservoir. Domestic structures for the operation of the sanctuary are closely-packed along the southeast side of the ravine, both north and south of the "klepsedra".