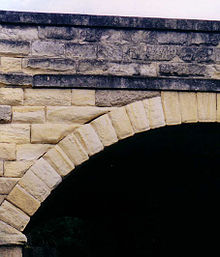 Oamaru stone is used on many of Otago's older structures, like this bridge arch in Oamaru.

Weathered cornice and decorated keystones in the harbour area of Oamaru.

Oamaru stone is a hard, compact limestone, quarried at Weston, near Oamaru in Otago, New Zealand.

The stone is used for building purposes, especially where ornate moulding is required. The finished stonework has a creamy, sandy colour. It is not strongly resistant to pollution, and can be prone to surface crumbling.

Oamaru stone was used on many of the grand public buildings in the towns and cities of the southern South Island, especially after the financial boom caused by the Central Otago goldrush of the 1860s. The city of Dunedin and town of Oamaru both have many fine examples of Oamaru stone edifices. The stone was used widely on buildings in many parts of New Zealand, including in the construction of both the Town Hall and the Chief Post Office in Auckland.[1]

The stone has been prominently used in combination with the more hard-wearing bluestone basalt found in many parts of the southern South Island, creating a distinctive style of dark grey basalt walls with lighter Oamaru stone facings. Notable buildings to use this combination include the Dunedin Railway Station, Otago University Registry Building, and Christchurch Arts Centre. In Oamaru itself the stone is most commonly found as the primary construction material, with many of the town's more notable buildings (such as the Waitaki District Council building) showing its distinctive creamy colour.

Its ease of working also appeals to sculptors and examples of Oamaru stone sculpture can be found throughout New Zealand.