The MAB PA-15 (Pistolet Automatique 15, also known as the P-15 or P.15 Standard) was designed by the Manufacture d'armes de Bayonne. The model number, 15, refers to the magazine capacity. When introduced, this was the first pistol holding a greater number of rounds than the 13-round Browning Hi-Power. The PA-15 was introduced in 1966 along with a short-lived 8-round version with a straight stack magazine, the P-8. The PA-15 was designed for commercial sale, primarily for export as French laws severely restrict the possession of "military-caliber" arms (which include the ubiquitous 9mm). The pistols were proofed at the St Etienne proof house and many were exported to the US. Early pistols are blued, later ones Parkerized. There was a competition version called the P-15 F1. This version had a longer slide and barrel (150mm), and an adjustable rear sight. While the French armed forces did not adopt the PA-15, the Army, Air Force (Armée de l'Air) and the Gendarmerie bought limited quantities of the competition model under the designation Pistolet Automatique de Précision (PAP) Modèle F1. When the French Gendarmerie was looking for a double-action pistol with a high magazine capacity to replace their aging PA 1950s, MAB produced an experimental model of the PA-15 with double-action lockwork. However, the Gendarmerie instead procured a license to manufacture the Beretta 92F as the MAS G-1, and the double-action PA-15 was not commercially produced. Outside France, in the 1970s the Finnish military and some police forces adopted the PA-15.[1]

When the Manufacture d'armes de Bayonne closed in 1982, all remaining PA-15 parts were sold to a French gunshop, Lechkine Armory (Armurerie Chevasson), which as of 2009 still assembled and sold new PA-15s, and is the sole source for new PA-15 parts.[2] 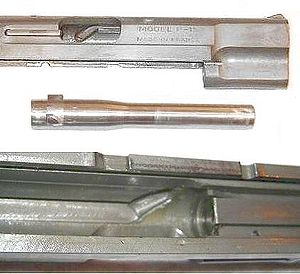 MAB PA-15 is a delayed blowback operated, semi-automatic pistol. It featured Savage-type, rotating, but not reciprocating, barrel, which has two lugs: one under the chambers is engaged in the frame and allows to the barrel to rotate but not to move back or forward. The other lug, on the upper surface of the barrel, is engaged in the curved-shaped notch inside the slide. When the pistol is fired, the barrel inertia and the bullet torque acted against the blowback force of the slide via the slope-shaped part of the notch. When bullet leaves the barrel, the slide rotates barrel and retracts to cycle the action. MAB PA-15 has a frame mounted safety, on the left side of the frame, and also internal magazine safety, which does not allow the gun to be fired with magazine removed.

A long-barreled version, known as the PA-15 Target, was used by the French military as the PAP F-1.