Room and pillar (also called bord and pillar) is a mining system in which the mined material is extracted across a horizontal plane while leaving "pillars" of untouched material to support the roof overburden leaving open areas or "rooms" underground. It is usually used for relatively flat-lying deposits, such as those that follow a particular stratum.

The room and pillar system is used in mining coal, iron and base metals ores particularly when found as manto or blanket deposits, stone and aggregates, talc, soda ash and potash. [1]

The key to the successful room and pillar mining is selecting the optimum pillar size. If the pillars are too small the mine will collapse. If the pillars are too large then significant quantities of valuable material will be left behind reducing the profitability of the mine.[1] The percentage of material mined varies depending on many factors, including the material mined, height of the pillar, and roof conditions; typical values are: stone and aggregates 75%, coal 60%, and potash 50%.[1] 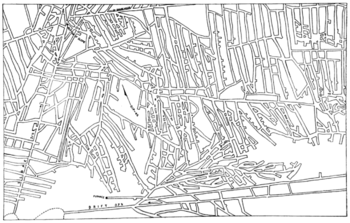 Room and pillar mining is one of the oldest mining methods. Early room and pillar mines were developed more or less at random, with pillar sizes determined empirically and headings driven in whatever direction was convenient.[2] 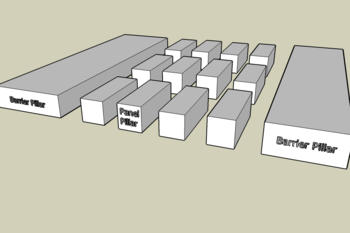 Room and Pillar mines are developed on a grid basis except where geological features such as faults require the regular pattern to be modified. The size of the pillars is determined by calculation. The load-bearing capacity of the material above and below the material being mined and the capacity of the mined material itself will determine the pillar size.[1]

If one pillar fails and surrounding pillars are unable to support the area previously supported by the failed pillar they may in turn fail. This could lead to the collapse of the whole mine. To prevent this the mine is divided up into areas or panels.[1] Pillars known as barrier pillars separate the panels. The barrier pillars are significantly larger than the "panel" pillars and are sized to allow them to support a significant part of the panel and prevent progressive collapse of the mine in the event of failure of the panel pillars.[1]