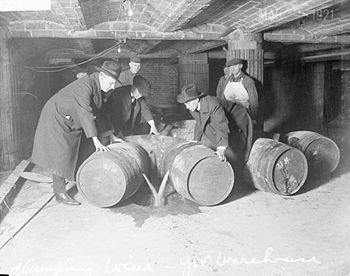 Its investigators were called Prohibition Agents, or more colloquially prohis (pronounced /ˈproʊhiː/). Its most famous agent was Eliot Ness. Some of the other famous lawmen who carried a Prohi's badge at one time or another in their career include former Texas Ranger Frank Hamer, full-blooded Cherokee Tom Threepersons, and Chicagoan Pat Roche. The two-agent team of Isidor "Izzy" Einstein and Moe Smith, working out of the New York City office, compiled the best arrest record in the history of the agency.

On July 1, 1930, the Prohibition Bureau was transferred from the Treasury Department to the Department of Justice. Early in 1933, as part of the Franklin D. Roosevelt-sponsored Omnibus Crime Bill, the Prohibition Bureau was briefly absorbed into the Federal Bureau of Investigation (FBI), or Division of Investigation as the agency was then called. At this point it became the Alcohol Beverage Unit. Though part of the FBI on paper, J. Edgar Hoover, who wanted to avoid liquor enforcement and the taint of corruption that was attached to it, continued to operate it as a separate, autonomous agency in practice.

Following the repeal of Prohibition in December 1933, the Alcohol Beverage Unit was removed from the FBI and the Justice Department, and returned to Treasury, where, coming full circle, it became the Alcohol Tax Unit of the IRS, ultimately evolving into the Bureau of Alcohol, Tobacco, and Firearms (ATF). In the wake of the terrorist attack on the World Trade Center on September 11, 2001, President George W. Bush signed into law the Homeland Security Act of 2002. In addition to the creation of the Department of Homeland Security, the law shifted ATF from the Department of the Treasury to the Department of Justice. The agency's name was changed to Bureau of Alcohol, Tobacco, Firearms, and Explosives. However, the agency still was referred to as the ATF for all purposes. Additionally, the task of collection of federal tax revenue derived from the production of tobacco and alcohol products and the regulatory function related to protecting the public in issues related to the production of alcohol, previously handled by the Bureau of Internal Revenue as well as by ATF, was transferred to the newly established Alcohol and Tobacco Tax and Trade Bureau (TTB), which remained within the Treasury Department. These changes took effect January 24, 2003.