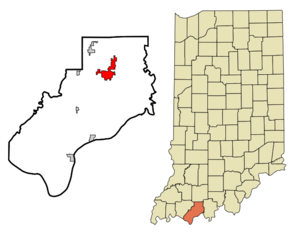 mapsize = 250x200px
map_caption = Location of Santa Claus in the state of

Santa Claus, Indiana, is a town located in Carter, Clay and Harrison townships, Spencer County in the southern portion of the state, between and the Ohio River.

Santa Claus, Indiana, was established in 1854. In 1856, when the town was (then known as Santa Fe, pronounced "fee") working to establish a Post Office; the US Post Service refused their first application as there was already another . Several town meetings were held, during which the name Santa Claus was selected.

The town has the world’s only post office to bear the name of . Because of this popular name, the Post Office receives thousands of letters to Santa from all over the world each year. A group of volunteers known as "Santa’s Elves" ensures each child receives a reply from Santa Claus; this tradition has been around since at least 1914. Every year, the Post Office also creates a special Christmas 'hand cancellation' pictorial postmark for use during the month of December. This practice attracts mail from all over the world wishing to have the official Santa Claus postmark. The pictorial postmark is chosen each year from submissions from art students at the local high school.

Santa Claus is currently home to approximately 2,200 residents. According to the 1990 , 927 people resided in Santa Claus. By 2000 the town's population had grown to 2,075. A majority of Santa Claus residents live within the gated community of Christmas Lake Village, which was first established in the late 1960s by Bill Koch. It consists of 2,500 acres developed around three lakes: Christmas Lake, Lake Holly, and Lake Noel. The street names in Christmas Lake Village are all themed and named after the Christmas season. Many residents also live in Holiday Village, a subdivision on the north side of town.

the name of Santa Claus was accepted by the Post Office Department, and the first post office was opened with John Specht as its first postmaster.

The town's unique name went largely unnoticed until the late 1920s, when Postmaster James Martin began promoting the Santa Claus postmark. The growing volume of holiday mail became so substantial that it caught the attention of Robert Ripley in 1929, who featured the town’s post office in his nationally-syndicated “Believe It or Not” cartoon.

Harris' project caught the attention of a rival entrepreneur, Carl Barrett, the Chicago head of the Illinois Auto Club. Disliking what he called Harris' materialism, Barrett planned his own tourist attraction "Santa Claus Park." On December 25, 1935, Barrett dedicated a 22 foot tall statue of Santa Claus that was erected on the highest hill in town. The statue was promoted as being solid granite, although it was subsequently revealed to be concrete when cracks formed years later.

Years of lawsuits between Harris and Barrett were costly distractions for the two entrepreneurs. The lawsuits centered around land ownership and went all the way to the Indiana Supreme Court. National news media covered the ongoing story of "Too Many Santas." Over the years both entrepreneur's visions became vacant and neglected.

On August 3, 1946, industrialist Louis J. Koch opened , which is claimed to be the first in the world. The park's name was changed to Holiday World in 1984. In 1993 a water park named Splashin' Safari was added, thus the name . The park, still owned and operated by the Koch family, attracts more than one million visitors annually.

More recently the development of Christmas Lake Village as a gated community has more than doubled the population of Santa Claus. In 2005, a local development company purchased and other buildings that comprised Santa Claus Town and announced plans to restore and re-open them to the public. Santa's Candy Castle was the first building of the original Santa Claus Town to be re-opened to the public, when its doors opened on July 1, 2006. Plans exist to re-open the remainder of the original attraction in the future.

The Optimist Club of Santa Claus is the only civic club in Santa Claus. It has 125 members and is very active in serving the community youth.

There were 732 households out of which 39.6% had children under the age of 18 living with them, 79.0% were married couples living together, 4.1% had a female householder with no husband present, and 15.2% were non-families. 12.2% of all households were made up of individuals and 4.0% had someone living alone who was 65 years of age or older. The average household size was 2.79 and the average family size was 3.05.

The is presently designing and building a new route for , which will place that highway within three miles of Santa Claus. Local officials are touting the new highway as a major tool to draw new economic development. Even if the hoped-for new development does not come, the new highway (a four-lane, limited-access expressway) will improve access to and other local attractions.

Indiana 162, the main highway through town (which will connect to the new U.S. 231), is known as Christmas Boulevard. This is in keeping with the Christmas theme of the town. It is also known as the Memorial Highway, so named for the local developer who was responsible for much of the town's development, as well as for the creation of the nearby .

* Coach
*Former Purdue Boilermakers fullback/linebacker
*, quarterback of the .
*, famous basket weaver.
*A Santa Claus resident, Skip Allen, was on the Christmas special of 's "" on , 2006.