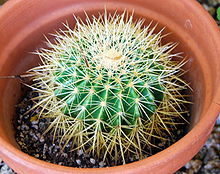 Many people mistakenly believe that the common sight of a tipped over barrel cactus is due solely to the cactus falling over from water weight. Actually, barrel cacti fall over because they grow based on the sun, just like any other plant. Water weight is just part of this occurrence. Unlike other plants, however, the barrel cactus usually grows towards the south (to prevent sunburn), hence the name "compass cactus."[2]

The barrel cactus is the last of the cacti to bloom in the calendar year. When it does bloom, a bright orange flower appears. The flower yields a yellow small pineapple-shaped fruit.

Barrel cacti can store up to and sometimes more than 500 kilograms of water.