The Soviet invasion of Manchuria or, as the Soviets named it, the Manchurian Strategic Offensive Operation (Манчжурская стратегическая наступательная операция, lit. Manchzhurskaya Strategicheskaya Nastupatelnaya Operaciya), began on August 9, 1945, with the Soviet invasion of the Japanese puppet state of Manchukuo and was the largest campaign of the 1945 Soviet–Japanese War. The Soviets conquered Manchukuo, Mengjiang (Inner Mongolia), northern Korea, southern Sakhalin, and the Kuril Islands. The rapid defeat of Japan's Kwantung Army was a very significant factor in the Japanese surrender and the end of World War II, as Japan realised the Russians were willing and able to take the cost of invasion of its Home Islands, after their rapid conquest of Manchuria and Sakhalin. [1][2][5][6][7][8][9][10]

Since 1983, the operation has sometimes been called Operation August Storm, after American Army historian LTC David Glantz used this title for a paper on the subject.[1]

As agreed with the Allies at the Tehran Conference (November 1943) and the Yalta Conference (February 1945), the Soviet Union entered World War II's Pacific Theater within three months of the end of the war in Europe. The invasion began on August 9, 1945, exactly three months after the German surrender on May 8 (May 9, 0:43 Moscow time).

Although the commencement of the invasion fell between the atomic bombings of Hiroshima, on August 6, and Nagasaki, on August 9, the timing of the invasion had been planned well in advance and was determined by the timing of the agreements at Tehran and Yalta, the long term buildup of Soviet forces in the Far East since Tehran, and the date of the German surrender; on August 3, Marshal Vasilevsky reported to Stalin that, if necessary, he could attack on the morning of August 5.

At 11pm Trans-Baikal time on 8 August 1945, Soviet foreign minister Molotov informed Japanese ambassador Sato that the Soviet Union had declared war on the Empire of Japan, and that from August 9 the Soviet Government would consider itself to be at war with Japan.[11] At one minute past midnight Trans-Baikal time on 9 August 1945, the Soviets commenced their invasion simultaneously on three fronts to the east, west and north of Manchuria:

Though the battle extended beyond the borders traditionally known as Manchuria—that is, the traditional lands of the Manchus—the coordinated and integrated invasions of Japan's northern territories has also been called the Battle of Manchuria.[12] Since 1983, the operation has sometimes been called Operation August Storm, after American Army historian LTC David Glantz used this title for a paper on the subject.[1] It has also been referred to as the Manchurian Strategic Offensive Operation.

This offensive should not be confused with the Soviet-Japanese Border Wars, (particularly the Battle of Khalkhin Gol/Nomonhan Incident of May–September 1939), that ended in Japan's defeat in 1939, and led to the Soviet–Japanese Neutrality Pact.[13]

The Far East Command,[2] under Marshal of the Soviet Union Aleksandr Vasilevsky, had a plan to conquer Manchuria that was simple but huge in scale,[1] calling for a massive pincer movement over all of Manchuria. This was to be performed by the Transbaikal Front from the west and by the 1st Far Eastern Front from the east; the 2nd Far Eastern Front was to attack the center of the pocket from the north.[2] The only Soviet equivalent of a theater command that operated during the war (apart from the short-lived 1941 "Directions" in the west), Far East Command, consisted of three Red Army fronts.

The Trans-Baikal Front was to form the western half of the Soviet pincer movement, attacking across the Inner Mongolian desert and over the Greater Khingan mountains.[2] These forces had as objective to secure Mukden (present day Shenyang), then meet troops of the 1st Far Eastern Front at the Changchun area in south central Manchuria,[1] and in doing so finish the double envelopment.[1] 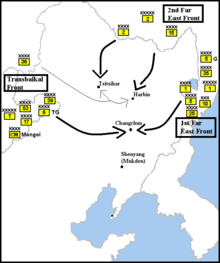 Amassing over one thousand tanks and self-propelled guns, the 6th Guards Tank Army had to serve as an armored spearhead, leading the Front's advance and capturing objectives 350 km (220 mi) inside Manchuria by the fifth day of the invasion.[1]

The 36th Army was also attacking from the west, but with the objective to meet forces of the 2nd Far Eastern Front at Harbin and Tsitsihar.[2]

The 1st Far Eastern Front was to form the eastern half of the pincer movement. This attack involved the 1st Red Banner Army, the 5th Army and the 10th Mechanized Corps striking towards Mudanjiang (or Mutanchiang).[1] Once that city was captured, this force was to advance towards the cities of Jilin (or Kirin), Changchun and Harbin.[1] Its final objective was to link up with forces of the Trans-Baikal Front at Changchun and Jilin (or Kirin) thus closing the double envelopment movement.

As a secondary objective, the 1st Far Eastern Front was to prevent Japanese forces from escaping to Korea, and then invade the Korean peninsula up to the 38th parallel,[1] establishing in the process what later became North Korea. The secondary objective was to be carried out by the 25th Army.[1] Meanwhile, the 35th Army was tasked with capturing the cities of Boli (or Poli), Linkou and Mishan.[1]

The 2nd Far Eastern Front was in a supporting attack role.[1] Its objectives were the cities of Harbin and Tsitsihar,[2] and to prevent an orderly withdrawal to the south by the Japanese forces.[1]

Each Front had "front units" attached directly to the Front instead of an army.[1] The forces totaled 89 divisions with 1.5 million men, 3,704 tanks, 1,852 self propelled guns, 85,819 vehicles and 3,721 aircraft. Approximately one-third of its strength was in combat support and services.[1] The Soviet plan incorporated all the experience in maneuver warfare that they had acquired fighting the Germans.[1]

The Kwantung Army of the Imperial Japanese Army, under General Otsuzo Yamada, was the major part of the Japanese occupation forces in Manchuria and Korea, and consisted of two Area Armies and three independent armies:[1]

Each Area Army (Homen Gun, the equivalent of a Western "army") had headquarters units and units attached directly to the Area Army, in addition to the field armies (the equivalent of a Western corps). In addition to the Japanese, there was the forty thousand strong Manchukuo Defense Force, composed of eight under-strength, poorly-equipped, poorly-trained Manchukuoan divisions. Korea, the next target for the Soviet Far East Command, was garrisoned by the Japanese Seventeenth Area Army.

The Kwantung Army had over six hundred thousand men in twenty-five divisions (including two tank divisions) and six Independent Mixed Brigades. These contained over 1,215 armored vehicles (mostly armored cars and light tanks), 6,700 artillery pieces (mostly light), and 1,800 aircraft (mostly trainers and obsolete types; they only had 50 first line aircraft). However, Kwantung Army was far below authorized strength; most of its heavy military equipment and all of its best military units had been transferred to the Pacific front over the previous three years. By 1945, the Kwantung Army contained a large number of raw recruits; as a result, it had essentially been reduced to a light infantry counter-insurgency force with limited mobility and experience. On paper, the Japanese forces were no match for the highly mobile mechanized Red Army, with its vastly superior tanks, artillery, experience and tactics.

The Imperial Japanese Navy contributed nothing to the defense of Manchuria, the occupation of which it had always opposed on strategic grounds.

Compounding the problem, the Japanese military made many wrong assumptions and major mistakes, the two most significant being:

Due to the withdrawal of the Kwantung Army's elite forces for redeploying into the Pacific Theatre, new operational plans for the defence of Manchuria against a seemingly inevitable Soviet attack were made by the Japanese in the Summer of 1945. These called for redeploying most forces from the border areas; the borders were to be held lightly and delaying actions fought while the main force was to hold the southeastern corner in strength (so defending Korea from attack).[5]

Further, they had only observed Soviet activity on the Trans-Siberian railway and along the east Manchurian front, and so were preparing for an invasion from the east. They believed that when an attack occurred from the west, the redeployed forces would be able to deal with it.[5][6]

However, although this redeployment had been initiated, it was not due to be completed until September, and hence the Kwantung Army were in the midst of redeploying when the Soviets launched their attack simultaneously on all three fronts. 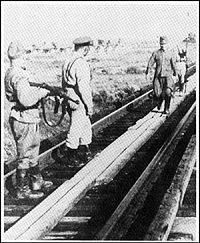 The operation was carried out as a classic double pincer movement over an area the size of Western Europe. In the western pincer, the Red Army advanced over the deserts and mountains from Mongolia, far from their resupply railways. This confounded the Japanese military analysis of Soviet logistics, and the defenders were caught by surprise in unfortified positions. The Kwantung Army commanders were involved in a planning exercise in (where) at the time of the invasion, and were away from their forces for the first eighteen hours of conflict.

Communication infrastructure was poor, and communication was lost with forward units very early on. However, the Kwantung Army had a formidable reputation as fierce and relentless fighters, and even though understrength and unprepared, put up strong resistance at the town of Hailar which tied down some of the Soviet forces. At the same time, Soviet airborne units were used to seize airfields and city centers in advance of the land forces, and to ferry fuel to those units that had outrun their supply lines.

The Soviet pincer from the east crossed the Ussuri and advanced around Khanka Lake and attacked towards Suifenhe, and although Japanese defenders fought hard and provided strong resistance, the Soviets proved overwhelming.

After a week of fighting, during which Soviet forces had penetrated deep into Manchukuo, Japan's Emperor Hirohito recorded the Gyokuon-hōsō which was broadcast on radio to the Japanese nation on August 15, 1945. The idea of surrender was incomprehensible to the Japanese people, and combined with Hirohito's use of formal and archaic language, the fact that he did not use the actual word for "surrender", the poor quality of the broadcast, and poor lines of communication, there was some confusion amongst the Japanese about what the announcement actually meant.

The Imperial Japanese Army Headquarters did not immediately communicate the cease-fire order to the Kwantung Army, and many elements of the army either did not understand it, or ignored it. Hence, pockets of fierce resistance from the Kwantung Army continued, and the Soviets continued their advance, largely avoiding the pockets of resistance, reaching Mukden, Changchun and Qiqihar by August 20.

On the Soviet right flank, the Soviet-Mongolian Cavalry-Mechanized Group had entered Inner Mongolia and quickly took Dolon Nur and Kalgan. The Emperor of Manchukuo (and former Emperor of China), Puyi, was captured by the Soviet Red Army. The cease-fire order was eventually communicated to the Kwantung Army, but not before the Soviets had made most of their territorial gains.

On August 18, several Soviet amphibious landings had been conducted ahead of the land advance: three in northern Korea, one in Sakhalin, and one in the Kuril Islands. This meant that, in Korea at least, there were already Soviet soldiers waiting for the troops coming overland. In Sakhalin and the Kurils, it meant a sudden establishment of Soviet sovereignty.

The land advance was stopped a good distance short of the Yalu River, the start of the Korean peninsula, when even the aerial supply lines became unavailable. The forces already in Korea were able to establish a bit of control in the peninsula's north, but the ambition to take the entire peninsula was cut short when American forces landed at Incheon on September 8, six days after the signing of the Japanese Instrument of Surrender.

700,000 Soviet troops occupied Manchuria, and looted the entire region of valuable materials and industrial equipment. Soviet troops looted and terrorized the people of Mukden, and were not discouraged by Soviet authorities from "three days of rape and pillage". In Harbin, Chinese posted slogans such as "Down with Red Imperialism!" Soviet forces ignored protests from Chinese communist party leaders on the mass rape and looting.[14][15][16][17][18][19]