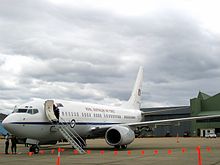 An RAAF Boeing Business Jet at an airshow in 2006

The Royal Australian Air Force has operated a number of specialised aircraft to transport members of the Royal Family, the Governor General of Australia, senior members of the Australian government, and other dignitaries.

The RAAF's current VIP aircraft are two leased Boeing Business Jets and three Bombardier Challengers which are operated by No. 34 Squadron RAAF and are based at Canberra International Airport. The Boeing Business Jets are custom configured Boeing 737s fitted with facilities such as conference tables, offices suites, secure satellite and communication capabilities. The two planes have a longer range than is standard for Boeing Business Jets. The prime minister regularly uses the aircraft for both domestic and international travel.

Prior to the acquisition of the 737s, the prime minister flew in custom-configured Royal Australian Air Force Boeing 707s. These aircraft were larger than the 737s currently in use.