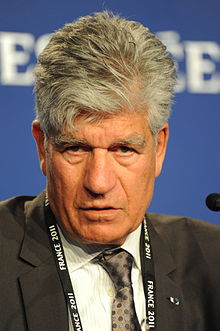 Maurice Lévy, born 18 February 1942 in Oujda, Morocco, is a leading French businessman currently the chief executive officer of Publicis and has served in that role since 1987.

Lévy joined Publicis in 1971 as its IT Director. One of his most important feats was putting in place a data security policy, which involved backing up all of the company's data on magnetic tape. A fire in the company's office (on the Champs-Elysées) proved the success of his backup and restoration strategy, as the company was back on its feet one week later. He then became the anointed successor of the company's then owner and Chief Executive, Marcel Bleustein-Blanchet, who made him Chairman of the Management Board, and Chief Executive Officer in November 1987.

In January 2008, Lévy was bestowed the International Leadership Award 2008 from the Anti-Defamation League in recognition of his stance towards tolerance and diversity.[1] He also financed the 2008 concert at the Trocadéro to celebrate the 60th anniversary of the founding of the state of Israel.