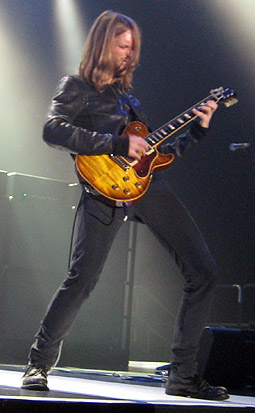 James Valentine (born James Burgon Valentine, October 5, 1978, Lincoln, ) is an American . He is best known as the ist for the group .

Valentine played in Lincoln bands Kid Quarkstar, Mondello,and Happy Dog. In 2000, Happy Dog changed its name to Square and he moved to Los Angeles, from Anaheim, California where he taught private guitar lessons out of his home.

Eventually the members of Square and became friends and when Kara's Flowers began looking for another guitarist, Valentine was approached. Personal tensions in Square helped the decision, and shortly afterward, Kara's Flowers became Maroon 5.

Valentine is a friend of John Mayer, whom he met in 1996 at a week long guitar school at Berklee in Boston, . Valentine once tried to get Mayer to move to Lincoln to play guitar for the Lincoln blues rock band Baby Jason and the Spankers. An opening slot on Mayer's 2004 summer tour helped bring widespread exposure to Maroon 5. Valentine contributed guitar work to Mayer's September 2006 release "" on the songs "Stop This Train" and "In Repair."

Valentine was raised as a member of (Mormon) and has three sisters and one brother. His family now lives in , and both parents work for , which is owned and operated by the LDS church. Valentine does not consider himself to be an active Mormon. His mother is a former beauty queen.

Valentine has played guitar on 's solo album, "", and has appeared in her music video for "Rise Up with Fists!!"

Before finding fame with Maroon 5, Valentine had also played with , firstly when guitarist broke his hand, and then later in 2001 when Barrett fell down some stairs. Valentine displayed a picture from one Reel Big Fish show he played during Maroon 5's appearance on "".