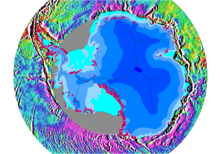 Gravity anomalies covering the Southern Ocean are shown here in false-color relief. Amplitudes range between -30 mGal (magenta) to +30 mGal (red). This image has been normalized to remove variation due to differences in latitude

Gravimetry is the measurement of the strength of a gravitational field. Gravimetry may be used when either the magnitude of gravitational field or the properties of matter responsible for its creation are of interest. The term gravimetry or gravimetric is also used in chemistry to define a class of analytical procedures, called gravimetric analysis relying upon weighing a sample of material.

How gravity is measured

An instrument used to measure gravity is known as a gravimeter, or gravitometer. Since general relativity regards the effects of gravity as indistinguishable from the effects of acceleration, gravimeters may be regarded as special purpose accelerometers. Many weighing scales may be regarded as simple gravimeters. In one common form, a spring is used to counteract the force of gravity pulling on an object. The change in length of the spring may be calibrated to the force required to balance the gravitational pull. The resulting measurement may be made in units of force (such as the newton), but is more commonly made in units of gals.

Besides precision, also stability is an important property of a gravimeter, as it allows the monitoring of gravity changes. These changes can be the result of mass displacements inside the Earth, or of vertical movements of the Earth's crust on which measurements are being made: remember that gravity decreases 0.3 mGal for every metre of height. The study of gravity changes belongs to geodynamics.

The majority of modern gravimeters use specially-designed metal or quartz zero-length springs to support the test mass. Zero length springs do not follow Hooke's Law, instead they have a force proportional to their length. The special property of these springs is that the natural resonant period of oscillation of the spring-mass system can be made very long - approaching a thousand seconds. This detunes the test mass from most local vibration and mechanical noise, increasing the sensitivity and utility of the gravimeter. Quartz and metal springs are chosen for different reasons; quartz springs are less affected by magnetic and electric fields while metal springs have a much lower drift (elongation) with time. The test mass is sealed in an air-tight container so that tiny changes of barometric pressure from blowing wind and other weather do not change the buoyancy of the test mass in air.

Spring gravimeters are, in practice, relative instruments which measure the difference in gravity between different locations. A relative instrument also requires calibration by comparing instrument readings taken at locations with known complete or absolute values of gravity. Absolute gravimeters provide such measurements by determining the gravitational acceleration of a test mass in vacuum. A test mass is allowed to fall freely inside a vacuum chamber and its position is measured with a laser interferometer and timed with an atomic clock. The laser wavelength is known to ±0.025 ppb and the clock is stable to ±0.03 ppb as well. Great care must be taken to minimize the effects of perturbing forces such as residual air resistance (even in vacuum), vibration, and magnetic forces. Such instruments are capable of an accuracy of about two parts per billion or 0.002 mGal[1] and reference their measurement to atomic standards of length and time. Their primary use is for calibrating relative instruments, monitoring crustal deformation, and in geophysical studies requiring high accuracy and stability. However, absolute instruments are somewhat larger and significantly more expensive than relative spring gravimeters, and are thus relatively rare.

Gravimeters have been designed to mount in vehicles, including aircraft, ships and submarines. These special gravimeters isolate acceleration from the movement of the vehicle, and subtract it from measurements. The acceleration of the vehicles is often hundreds or thousands of times stronger than the changes being measured. A gravimeter (the Lunar Surface Gravimeter) was also deployed on the surface of the moon during the Apollo 17 mission, but did not work due to a design error. A second device (the Traverse Gravimeter Experiment) functioned as anticipated.

Microgravimetry is a rising and important branch developed on the foundation of classical gravimetry. Microgravity investigations are carried out in order to solve various problems of engineering geology, mainly location of voids and their monitoring. Very detailed measurements of high accuracy can indicate voids of any origin, provided the size and depth are large enough to produce gravity effect stronger than is the level of confidence of relevant gravity signal.

The modern gravimeter was developed by Lucien LaCoste and Arnold Romberg in 1936.

They also invented most subsequent refinements, including the ship-mounted gravimeter, in 1965, temperature-resistant instruments for deep boreholes, and lightweight hand-carried instruments. Most of their designs remain in use (2005) with refinements in data collection and data processing.