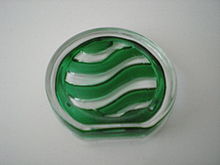 Air fresheners are consumer products used in homes or commercial products used in restrooms that typically emit fragrance. There are two broad air freshener categories: continuous action and instant action. Continuous action products include: scented candles and devices which use a candle flame or some other heat source to heat and vaporize a fragrance formulation; Incense burners; wall plug-ins which either use Piezoelectricity technology to aerosolize fragrance or heat to vaporize it; fragrance impregnated gels which release fragrance as the gel evaporates sometimes with the help of an electric fan; wick and reed diffusers which release fragrance by evaporation from fragrance-soaked wicks or wooden reeds; and fragrance impregnated materials like floor wax, paper, plastics, wood which release fragrance by off gassing and lastly nebulization systems which convert liquid fragrances into a vapor in a cold process without the use of heat.

Instant action systems are mainly aerosol sprays, or atomizers. The aerosol spray uses a propellant and fragrance packaged under pressure in a sealed metal or glass container with a valve which is opened by pressing down a button which contains a spray nozzle – the actuator. When the container's valve is opened by pressing the actuator, fragrance is forced through the spray nozzle located inside the actuator to create a mist of droplets containing fragrance. These droplets are 30 to 50 micrometres in diameter. The atomizer is a glass, metal or plastic container of fragrance which operates in a similar fashion except that the actuator is a pump which when pressed a few times creates the pressure to aspirate the fragrance from the container through a tube into the actuator and spray nozzle. The mist created contains droplets 50 to 150 micrometres in diameter. A recently developed type of aerosol packages a plastic bag of fragrance into a can. The bag is attached to the valve/actuator/spray nozzle and sealed in the can surrounded by air under pressure. When the actuator is pressed, the valve opens and the liquid forced through the nozzle by the pressure around the bag. This is called "bag-on-valve" technology.

Air fresheners introduce fragrance into the air of interior spaces either as droplets which transition to vapor or as the molecules of fragrance ingredients evaporating from a source. Fragrance diffuses into the air to mask other odors or to introduce a specific odor.

The control of odors is addressed by various methods;

Fragrances have been used to mask odors since antiquity. A variety of compounds have been used over the past two millennia for their abilities to create pleasant aromas or eliminate unpleasant odors.

The first modern air freshener was introduced in 1948. Its function was based on a military technology for dispensing insecticides and adapted into a pressurized spray using a chlorofluorocarbon (CFC) propellant. The product delivered a fine mist of aroma compounds that would remain suspended in the air for an extended period of time. This type of product became the industry standard and air freshener sales experienced tremendous growth. In the 1950s, many companies began to add chemicals that counteract odors to their fragrance formulas. These chemicals, intended to neutralize or destroy odors, included unsaturated esters, pre-polymers, and long-chain aldehydes.

In the 1980s, the air freshener market shifted away from aerosols, due to concerns over the destruction of the ozone layer by chlorofluorocarbons (CFCs). Many other air freshener delivery methods have become popular since, including scented candles, reed diffusers, potpourri, and heat release products.

Research at the University of California found that the prominent products of the reaction of terpenes found in air fresheners with ozone included formaldehyde, hydroxyl radical, and secondary organic aerosol.[3]

Many air fresheners employ carcinogens, volatile organic compounds and known toxins such as phthalate esters in their formulas. A Natural Resources Defense Council (NRDC) study of 13 common household air fresheners found that most of the surveyed products contain chemicals that can aggravate asthma and affect reproductive development. The NRDC called for more rigorous supervision of the manufacturers and their products, which are widely assumed to be safe:

The study assessed scented sprays, gels, and plug-in air fresheners. Independent lab testing confirmed the presence of phthalates, or hormone-disrupting chemicals that may pose a particular health risk to babies and young children, in 12 of the 14 products—including those marked 'all natural.' None of the products had these chemicals listed on their labels.[4]

On September 19, 2007, along with the Sierra Club, Alliance for Healthy Homes, and the National Center for Healthy Housing, the NRDC filed a petition with the U.S. Environmental Protection Agency and the Consumer Product Safety Commission to report the findings.[5]

The University of Bristol's Avon Longitudinal Study of Parents and Children (ALSPAC) published findings indicating that exposure to volatile organic compounds through frequent use of air fresheners and other aerosols in the home was found to correlate with increased earaches and diarrhea in infants, and with increased depression and headaches in their mothers.[6][7]

In 2008, Anne Steinemann of the University of Washington published a study of top-selling air fresheners and laundry products.[8][9] She found that all products tested gave off chemicals regulated as toxic or hazardous under federal laws, including carcinogens with no safe exposure level, but none of these chemicals were listed on any of the product labels or Material Safety Data Sheets. Chemicals included acetone, the active ingredient in paint thinner and nail-polish remover; chloromethane, a neurotoxicant and respiratory toxicant; and acetaldehyde and 1,4-dioxane, both carcinogens. A plug-in air freshener contained more than 20 different volatile organic compounds, with more than one-third classified as toxic or hazardous under federal laws. Even air fresheners called "organic," "green," or with "essential oils" emitted hazardous chemicals, including carcinogens.

In 2009, Stanley M. Caress of the University of West Georgia and Anne C. Steinemann of the University of Washington published results from two national epidemiological studies of health effects from exposure to air fresheners. They found that nearly 20 percent of the general population and 34 percent of asthmatics report headaches, breathing difficulties, or other health problems when exposed to air fresheners or deodorizers.[10]

Removing the source of an unpleasant odor will decrease the chance that you will smell it. Ventilation is also important to maintaining indoor air quality and can aid in eliminating unpleasant odors. Simple cleaners such as white vinegar and baking soda, as well as adsorbents like zeolite, are effective at removing odors. Some house plants may also aid in the removal of toxic substances from the air in building interiors.[11][12]