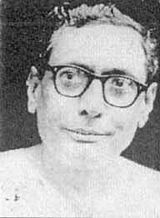 Phani Sarma (1909 - 1978) was an Assamese theatre actor, playwright, film actor and director. Beginning as a stage actor, he appeared in the first film ever made in Assamese cinema, Joymati. in 1935.

The theatrical career of Phani Sarma started as a gatekeeper of the women’s gallery of the prestigious Ban Stage situated at Tezpur. His father Molan Sarma was also an exponent of drama and was a noted actor of Ban Stage. Along with his father, Phani Sarma regularly went to the Ban Stage and closely observed the distinguished acting of a number of veteran actors like Indreswar Borthakur, Dr Lalit Mohan Chowdhury, Prafulla Borua. This inspired young Bolin (as Phani Sarma was popularly known) towards acting and had a deep impact on his future life. In 1928, he got the opportunity to act on the Ban Stage for the first time in the role of Akbar in the drama Rana Pratap. That was the beginning of a new chapter in the life of Phani Sarma. 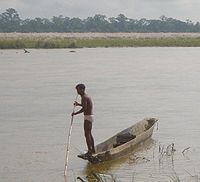 In 1930, Phani Sarma joined the Kohinoor Opera, the first mobile theatre group of Assam, started by Natyacharya Brajanath Sarma. From Dhubri to Sadiya, from the north bank to the south bank of the Brahmaputra River, Kohinoor Opera performed its dramas, attracting thousands of spectators whi came to see Sarma perform. Apart from initiating a theatrical movement, the Kohinoor Opera introduced co-acting on the stages of Assam. In 1931, Brajanath Sarma, with the help of Phani Sarma introduced female actresses for the first time to appear in their drama productions at a time when male acting was completely dominant, revolutionizing the nature of Assamese theatre.

In 1933 Phani Sarma played a significant role in the first Assamese feature film Joymati directed by Jyoti Prasad Agarwala, where he played the role of the historical figure of Gathi Hazarika, the villain of the film. The notable acting of Phani Sarma in that role was a special feature of the film which was released in 1935, and Sarma went on the star in Agarwalla's second picture Indramalati.

In 1948 Sarma, along with Bishnu Rabha made a feature film Siraj, based on a popular short story written by Deshapran Lakshmidhar Sarma.

In 1955 he directed and starred in Pioli Phukan, also playing the films protagonist Pioli Phukan. His last film was Ito Sito Bahuto in 1963 where he appeared as an actor rather than taking the director's helm.

Despite his performances on the stage and screen, Phani Sarma also earned many accolades as a playwright in which he more possibly more acclaimed. Though few in quantity, his dramas are very rich in quality depth, using his knowledge to lay more emphasis upon its dramatic side rather than the literary side. With a universal appeal and substance, all his dramas became very popular on the stage and were widely acclaimed by the critics.

On the basis of a rebellion that took place during the Ahom King Sunyeophaa’s reign, as described by renowned historian Dr SK Bhuyan in his book Konwar Bidroh, Phani Sarma wrote a historical drama Bhogjara. His first film Joymati had also revolved around historical events in the Ahom kingdom and its director whom Sarma had worked under, Jyoti Prasad Agarwala was the pioneer among such a new wave of dramatists. With local plots, he wrote a number of dramas like Sonit Kunwari, Karengar Ligiri, Lobhita, etc. Following in Jyotiprasad’s footsteps, Phani Sarma wrote a number of dramas with cultural familiarity to the Assamese people. With his own dramatic approach and treatment, Bhogjara became successful in its own right as a powerful drama.

After the success of his 1948 film Siraj, it inspired him to write the drama veraion of the film also named Siraj. It was regarded as a document of Hindu-Muslim integrity as the memory of Partition was still fresh in the minds of the people. Phani Sarma himself played the title role of the drama on more than a hundred stages across the state of Assam in the 1950s and 1960s.

On the basis of his own experiences as an actor and the sad news of the death of his son whilst stage acting, Phani Sarma wrote the social drama Kiya, a tale of an artiste who dedicated his own personal life and enjoyment to entertain other people with very little compensation from society. Sarma again addressed issues of isolation and corruption in his later drama Nag-Pas. However he often incorporated humour into such dramas, and the drama Kola-Bazarthe incorporated elements of comedy with more serious issues of social injustice and inequality.

Sarma was also accredited with translating J. B. Priestley’s famous drama An Inspector Calls into the Assamese language.

... aka Lots of Things Around