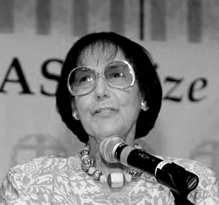 Fay Kanin (born ) is an American screenwriter, playwright and producer. Kanin was President of from 1979 to 1983.

Born Fay Mitchell to Bessie Kaiser Mitchell and David Mitchell in New York City, she was raised in Elmira, New York, where she won the New York State Spelling Championship at twelve and was presented with a silver cup by then Governor . She was encouraged to write for money by supplying small items to the Elmira Star Gazette.

Kanin longed to move to Los Angeles to get into pictures and her parents indulged her. Her father moved to California first to secure a job, then she and her mother packed everything and followed by train.

There was a small theater at the studio where contract players would put on plays. While Kanin was acting in 's "", she came to the attention of Michael Kanin, who had just been hired as a writer in the B unit. Michael was trained as an artist and had turned to commercial art and painting scenery for burlesque houses to help support his parents during the Depression. They were introduced by a mutual friend, and Michael practically asked Kanin to marry him right then and there, but it took her a little while to come around to the idea.

The Kanins rented a house in Malibu for their honeymoon, and after buying an "New Yorker" short story about a boarding house for boxers, they spent the next six months writing the adaptation, "". They knew they were on the track to a partnership when MGM bought the screenplay.

"We would make a story outline together with rather detailed descriptions of the scenes. Then we divided up the writing, each taking the scenes we felt strongly about. Then one or the other of us would put it all together into a single draft. We did find a common voice, though we had different strengths. As an artist, Michael brought a great visual sense to the process. I was a people person who loved the characters and the dialogue. Through the collaboration, we learned a lot from each other and about each other. But the time came when I felt as if we were together 48 hours a day. Writing with someone else always requires some degree of compromise, as does marriage. When it came down to the question of which would survive, the marriage or the writing partnership, it was a pretty easy decision. But I remember that it was a challenge convincing the powers that be that we had been successful writers individually and would be again. We were hyphenated in people's minds: Fay-and-Michael Kanin. To again become Fay Kanin and Michael Kanin took some doing."

Michael took a job working with to work on the Tracy / Hepburn project "", and Kanin took the time to write a play, "Goodbye My Fancy", about a female congressional representative renewing past loves. It would be a Broadway smash starring , , and , and would eventually be filmed by in 1951 with and Robert Young.

During World War II, Kanin came up with an idea to promote women's participation in the war effort, and presented the idea for "" radio show to the heads of NBC Radio for which Kanin would write the scripts and do the network commentary. Along those lines, she contributed to the story "Blondie For Victory", one of the low-budget series based on the popular comic strip, where Blondie organizes Housewives of America to perform homefront wartime duties much to the dismay of Dagwood. Kanin even made an appearance as an actor in "" (1947), co-written by her brother-in-law and his wife .

The Kanin's wrote "" in 1952 in which becomes a good father and falls in love with , the film " Rhapsody" in 1954 and "" in 1956, a musical remake of "". But it would be the Oscar-winning script for "Teacher's Pet" in 1958 for which they would be best remembered; a film about a self-made newspaper editor who has a love-hate relationship with journalism teacher . The film almost did not get made since the Kanins were not under any studio contract, and having shopped the script around without attracting any interest, it was only after a rewrite inspired by 's "" that producer and director purchased it.

It was while the couple were on holiday in Europe that the Kanins learned they had been blacklisted by the HUAC.

"What they had against us was that I had taken classes at the Actors Lab in Hollywood where some of the teachers were from the Group Theater and therefore suspect, and we had been members of the Hollywood Writers Mobilization, an organization in support of World War II to which almost all of Hollywood's writers belonged. It was ridiculous, but it was very real, and there was nothing we could do about it. We took a larger mortgage on the house and started writing a play, but we didn't work in films for almost two years."

They were unable to find work again until director insisted that hired the couple, needing them for the film "Rhapsody" in 1953.

In 1961 the couple adapted Akira Kurasawa's "Rashomon" for the Broadway play of the same name; with a further adaptation for the screen, in s "".

In the early 1970s, Kanin began solo writing in earnest with "", about a strong, older woman lawyer played by , and a younger male lawyer. At first Kanin was put off by the lack of an immediate reaction from an audience, but once she realized that more people had seen it in one night than would have ever seen it in theaters if it played for a year, she was hooked and would write five more films for television.

"Tell Me Where it Hurts" started from a small newspaper article about a group of women in who got together to just talk, and that little film starring would win two Emmys. The following year, she wrote and co-produced "Hustling" based on 's non-fiction book. The film was about a prostitute recounting her life to a reporter, and would star and . For weeks Kanin would interview arrested working girls at the Midtown North police station, and after the film aired, she even received letters complimenting her on how fairly she had treated them.

The television movie "Friendly Fire" would be seen by an estimated sixty million people in 1979. Written and co-produced by Kanin, it starred as a mother who challenges the military's "official story" of how her son died in Vietnam. The non-fiction book by C. D. B. Bryan was about the Mullen family and their discovery that their son had been accidentally killed by American troops. Kanin spent five months secluded with Bryan's research tapes adapting the book, and "Friendly Fire" would win the Emmy for Best Outstanding Drama that year.

In 1975, two Universal Studio producers asked Kanin for a screenplay about a tacky, biracial burlesque theater in 1933 Chicago. Nothing ever came of it. But in 1985 Kanin adapted her unproduced screenplay for the stage.

Kanin was elected president of the in 1979, and would serve four terms until 1983.

Fay Kanin is on the Academy of Motion Picture Arts and Sciences Board of Governors 2007–2008.