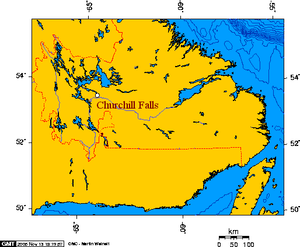 The Churchill River (French: fleuve Churchill) is a river in Newfoundland and Labrador which flows east from the Smallwood Reservoir in Labrador into the Atlantic Ocean via Lake Melville. The river is 856 km (532 mi) long and drains an area of 79,800 km2 (30,800 sq mi); it is the longest river in the province. It was named Hamilton River until 1965.

This river was originally known as "Mishtashipu" by the Innu, translated as "la Grande rivière" and "Grand River" by French- and English-speaking settlers and traders. In 1821, Captain William Martin, in command of HM brig Clinker, named it Hamilton River after Sir Charles Hamilton, who was Governor of Newfoundland from 1818 to 1825. In 1965, it was renamed, without consultation, by Premier Joey Smallwood, to honour former Prime Minister of the United Kingdom Sir Winston Churchill on February 1, 1965.

Churchill Falls is the site of a major hydroelectric project, which has a rated capacity of 5,428 MW. Other hydroelectric plants on the river are planned bringing the total to over 9,200 MW. The Churchill Falls development has become a source of friction between two Canadian provinces. The province of Newfoundland and Labrador believes that, although the project is located in Labrador, Hydro-Québec, which provided a major part of the financing and access to the North American power grid, has taken an unfair[neutrality is disputed] share of the profits from this development. Hydro-Québec buys power from the Churchill Falls project at rates established in 1969.