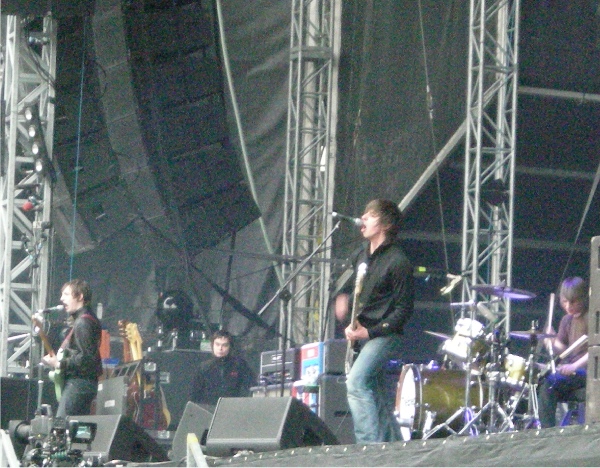 The Enemy are an English rock band formed in in 2006, signed to (UK). In June 2007, The Enemy played twice at , played the 'Guardian lounge' on Saturday and the much larger 'Other Stage' on Sunday. They also headlined on the Saturday night of in the 'Futures' tent on . The band's debut album "" (2007) went straight to Number 1 in the UK Albums chart on release.

The Enemy met their original manager John Dawkins under the crest of the after a game between Coventry and Celtic for the Testimonial. On May 15 2006 DJ gave them their fist airplay, downloading "40 Days and 40 Nights" direct from Myspace.

In 2006 the band were the opening act at Coventry's , and again played the event in July 2007 as second headliners beneath the .

They first gained acclaim when they were mentioned in "" as the act most likely to "break your windows" for 2007. They supported , , , Ash and on their UK tours.

Building on their rapid exposure, The Enemy appeared on the 2007 Rock 'N' Roll Riot Tour during September and October 2007 along with and as well as the Festival. They also supported on the last night of their European tour at the .

March 2008 saw the band start production on their second album and playing six nights in a row at the London Astoria.

In April 2008 the band played at Coventry's Ricoh Arena, selling out two nights. The next month they supported at Elland Road Stadium. They then headlined the on , a 30,000 capacity free gig in Coventry's War Memorial Park.

Their song "Aggro" is featured on the upcoming video game

In September 2007, , presenter of the XFM Breakfast show broadcasted a statement declaring that the band would not be played on his show again. After playing their single "You're Not Alone" for seven seconds, he reasoned that altercations between himself and the band over a television interview meant that they would no longer be played by him.