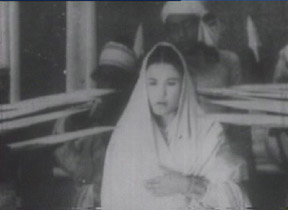 "Joymati" (Assamese: জয়মতী, "Joimoti"), released in 1935, was the first ever film. Based on 's play on the 17th century story of , the film was produced and directed by the noted Assam poet , and starred and acclaimed stage actor and playwright . The film was shot between 1933 and 1935, [Tamuli, Babul (2002) " [http://www.geocities.com/bipuljyoti/cinema/joymoti.html The making of Joymoti] ", The Assam Tribune.] and released by Chitralekha Movietone in 1935, which marked the beginning of .

Although never a commercial success, the film was noted for its political views and the use of a female which in at the time was almost unheard of.

Partly lost today, it is the third [ [http://www.rupkowar.com/film.html Jyoti Prasad Agarwala and his films] ] and the first "realism" and political film in . [Mazid, Altaf (2006), " [http://www.himalmag.com/2006/march/report_5.html Joymoti : The first radical film of India] ", Himal Magazine, March 2006.] The film has been restored in part by Altaf Mazid. [Interview with Altaf Mazid, " [http://www.himalmag.com/2006/march/interview_2.html Restoring Joymoti] ", Himal Magazine, March 2006.]

Set in 17th century , the film recounts the sacrifice of Joymati, a who was tortured and killed by the evil for refusing to betray her husband. The event is interpreted in contemporary terms and calls for a greater harmony between the people of the hills and the plains. The hills are represented by the leader Dalimi, a Naga tribeswoman who shelters the fugitive Prince .

On his way back from England, Jyoti Prasad Agarwala spent about 6 months at the UFA Studio, learning film-making. After reaching Assam, he decided to make his first film. He established Chitraban Studios at Bholaguri Tea Estate. Two camps were established: one near the Manager's Bungalow for the female artists and the other near the tea factory for the male artists. Tea was manufactured in the day, and at night artists performed rehearsals. The artists were also made to perform physical exercises to keep them fit.

A special property room was constructed, in which Jyoti Prasad Agarwala collected traditional costumes, ornaments, props, hats, etc. This became a virtual museum. Technicians were brought from lahore. Ice was transported from Calcutta for developing the film.

The film was taken to Dhaka for editing, when he discovered that there was no sound for half the film. Due to various constraints he could not collect the artists from their native places. He hired a sound studio and dubbed the voices of all male and female characters. On a single day he recorded six thousand feet of film. [Bora, Prafulla Prasad: "Film Making in Assam", The Brahmaputra Beckons, 1982.]

Joymati was the wife of the prince . During the purge of the princes from 1679 to 1681 under King (Loraa Roja) instigated by Laluk Sola, Gadapani took flight. At various times he took shelter at Sattras and the adjoining hills outside the Ahom kingdom. Failing to trace Prince Gadapani, Sulikphaa's soldiers picked up his wife Joymati. Despite brutal and inhuman torture, the princess did not reveal the whereabouts of her husband. After continuous torture for several days she expired.

Joymati's self-sacrifice bore fruit later. Laluk was murdered in November 1680 by a disgruntled body of household retainers. The ministers were now roused to a sense of patriotism, they made a search for Gadapani. gathered strength came back from his exile in Garo hills to oust Sulikphaa from the throne. Joymati knew that her husband was the only person who could end Sulikphaa-Laluk terror rule. For her love and supreme sacrifice for her husband and the country, folk accounts refer to her as a "

The film was released on March 10, 1935 at Raonak Theatre and was inaugurated by . At it was screened at Kumar Bhaskar Natya Mandir, the only cinema house with sound in the entire Assam. The film was not well received, and it suffered a huge financial loss.

"Joymati", is a study into the visual culture and history of the region of . "Joymati" carried the bright possibility of a film-tradition. The significant similarities with the n montage, reflect an element of influence. The film is noted for its constantly changing camera angles, the unique sets, and other stylistics tactics, assembled from the imagination of Jyotiprasad in his film debut. His and demeanor can clearly be seen in this pioneering film.

For indoor shooting of the film, Jyotiprasad set up a studio at Bholaguri Tea Estate, near which was owned by the Agarwalla family. Named as ‘Chitraban’, the studio was built using local materials such as wood, and stumps. The set was artistically designed by Jyotiprasad himself using bamboo mats, of different sizes, horns, buffalo horns, and spears. To decorate the Ahom royal court, he utilized various royal utensils such as , , , , , and . He also imported a Faizi sound recording system from and the first camera into from Mehta of .

The film unit arrived at Bholaguri Tea Estate to commence filming in December, 1933 and camped in front of the garden factory. Jyotiprasad made all the accommodation arrangements and set up a laboratory for developing film by the side of his ‘Chitraban’ studio.

According to , who enacted an important role in the film, Chitraban was not only a film studio, but acted more like a film training institute. Apart from acting, Jyotiprasad taught the actors the different techniques of filmmaking such as film developing, processing, and , whilst revelaing his sound knowledge of different film shots like mixed shot, , , dissolve, back projection and model shooting. The 17th century costumes used in the film were designed by Jyotiprasad and the make-up was done by the actors themselves, assisted by Sonitkowar Gajen Borua. The shooting at the Chitraban studio started in April, 1934, but was initially delayed as director Jyotiprasad could not at first find a suitable girl to play the role of the heroine of the film or several other members which would be suited to the role. Jyotiprasad floated newspaper advertisements for actors and actresses, mentioning brief outlines of the film and descriptions of the characters. His idea was to get ‘types’ for his characters, not seasoned artists, even offering remunerations for successful candidates. One of his preconditions was that potential actors needed to be from ‘respectable’ family backgrounds, as opposed to those from red-light areas that had been used during the 1930s in . After a prolonged search and detailed interviews, he discovered to play the role of Joymoti in a remote village near , who became the first actress of . He then brought together the other chosen actors to acquaint them with his characters, few of which had ever even seen a film. He sought out a film-making trio, and the Faizi Brothers, from Lahore as cameraman and sound-recordists.

During filming, due to the rainy season developments in the filming process were inhibited, and he had to suspend shooting for several days due to insufficient light with no . Shooting was done under sunlight by using reflectors. When the rain stopped, the banana stumps used to build the Ahom court dried under the sunlight yet filming continued only by fastening in those places. Nevertheless filming was eventually completed in August 1934 and released in early 1935 after Jyotiprasad used his editing skills to structure the film.

After the the film was almost forgotten and lost, but in the early 1970s, Jyotiprasad’s youngest brother, Hridayananda Agarwalla, found seven reels of the lone print of Joymoti while cleaning the junk out of his garage. Jyotiprasad’s film venture had cost his family’s tea garden huge losses and had placed his family in difficulites. The condition of the reels was one of near-depletion, but his brother Hridayananda Agarwalla hired , another famous Assamese director to conduct the long documentary, in 1976, in which the reels were incorporated. The documentary saved the reels of films which have been copied and remastered.

The fate of the filming studio

Situated about 10 km west of Gohpur, the temporary film studio at Bholaguri today looks deserted, bearing the nostalgia of its glorious past. Once owned by Jyotiprasad, the ownership of the garden passed on to the in 1978. The garden, where Jyotiprasad laid the foundation stone of Assamese cinema, today lies abandoned. The bungalow, where Jyotiprasad composed the music of "Joymati" on his organ, still stands in the same place, but in a dilapidated condition.

* , who played Joymati, remained unmarried because she called her co-actor "Bongohordeo" (husband) in the film. [Goswami, Sabita, " [http://www.geocities.com/bipuljyoti/cinema/aideuhandique.html The First Lady of Assamese Cinema] ", The Assam Tribune.]
* Jyoti Prasad Agarwala spent Rs 60,000 on "Joymati", which he lost. He tried to recover that money by making his second film, "Indramalati".