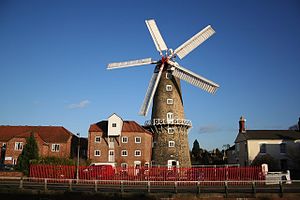 Maud Foster Windmill is a seven-storey, five sail windmill located by the Maud Foster Drain in Skirbeck, Boston, Lincolnshire, which she takes her name from. She is one of the largest operating windmills in England being 80 feet (24.38 m) tall to the cap ball.

One of the best sited and proportioned mills in Lincolnshire[citation needed], this beautiful tower mill was erected for Thomas and Isaac Reckitt in 1819 by the Hull millwrights Norman and Smithson to grind corn that was brought in by barge along the drain. The original drawings and accounts survive, telling us that it cost £1826-10s-6d, which was a large sum in those days. It shows just how far advanced millwrighting was in this area by 1819, with all-iron gearing, patent sails and a tall, well-proportioned, and untarred tower showing the fine masonry. In her heyday in the mid-19th-century five- and sixed-sailed windmills were not that rare and unusual as they are today.

Sold in 1835 the mill changed hands to various owners. In 1914 Alfred Ostler bought the mill and run her until 1942 when he gave up business and closed her down. She was preserved as a landmark in 1953, the last of more than a dozen mills in the town.

There are five instead of the more usual four patent sails, the shutters of which are now at Wrawby post mill. An unusual feature is the weather beam (or 'rode balk') which is of cast iron, probably replacement of the original wooden one. The brake wheel is of wooden clasp-arm type with an iron tooth ring and wooden brake. The wallower is also of iron with a wooden friction drive to the sackhoist. The dust floor is more spacious than is often found in Lincolnshire and is lit by windows, a welcome change from the gloomy, cramped space usually encountered by mill explorers!

Three pairs of stones, two grey and one French, survive on the fourth floor with vats, spouts etc. all intact. The great spur wheel is of iron, as is the upright shaft. The stone nuts have wooden cogs, as usual. The spout floor gives access to the reefing stage and contains a fine governor which controls all three pairs of stones. The bridge trees are of iron and are Y-shaped, with integral bridging boxes.

In 1987 the mill was bought by James Waterfield and his family who restored her in 1988 to fully working order being now the most productive windmill in all England.[citation needed] Visitors may climb all seven floors and see the milling process in action as well as enjoy fine views of the town from the balcony. Maud's tearoom in the old granary serves morning coffee, lunches and afternoon teas with good old-fashioned home baking and local specialities on the menu. The mill shop sells flour, porridge and good quality souvenirs as well as local history books.

On 11 November 2008, a sail was blown off the mill in a gale. The falling sail landed on one of the mill buildings.[1]