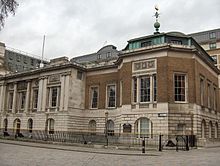 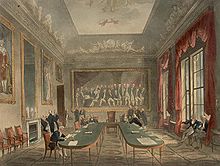 A meeting at Trinity House circa 1808

The Corporation of Trinity House of Deptford Strond[1] is the official General Lighthouse Authority for England, Wales and other British territorial waters (with the exception of Scotland, the Isle of Man and Northern Ireland). It is responsible for the provision and maintenance of navigational aids such as lighthouses, lightvessels, buoys and maritime radio/satellite communication systems. Trinity House is also the official deep sea pilotage authority providing expert navigators for ships trading in Northern European waters. It is a non-departmental public body.

Master of the Corporation

The Master of the Corporation (now a merely honorary title) is the Princess Royal. Previous Masters of Trinity House have included the diarist Samuel Pepys and the Duke of Wellington, and Admiral William Penn (father of William Penn, founder of Pennsylvania). Other prominent individuals in Britain, often connected with commercial shipping or the Admiralty, have been associated with Trinity House, including Winston Churchill, who gained his status as an Elder Brother of Trinity House as a result of his position as First Lord of the Admiralty before and during World War I.[citation needed] Often, especially on naval-related forays during the Second World War, he was seen in Trinity House cap or uniform. Winston Churchill also had a Trinity House vessel (THV) named after him, the THV Winston Churchill.[2]

Trinity House is ruled by a court of thirty-one Elder Brethren, presided over by a Master, at present HRH the Princess Royal. These are appointed from 300 Younger Brethren who act as advisors and perform other duties as needed. The Younger Brethren are themselves appointed from lay people with maritime experience, mainly naval officers and ships' masters but also harbourmasters, pilots, yachtsmen and anyone with useful experience.[3]

The present Trinity House was designed by architect Samuel Wyatt and built in 1796. It has a suite of five state rooms with views over Trinity Square, The Tower of London and The River Thames.

The Corporation came into being in 1514 by Royal Charter granted by Henry VIII under the name "The Master, Wardens, and Assistants of the Guild, Fraternity, or Brotherhood of the most glorious and undivided Trinity, and of St. Clement in the Parish of Deptford-Strond in the County of Kent.".[4] The first Master was Thomas Spert, captain of Henry’s flagship Mary Rose. The name of the guild derives from the church of Holy Trinity and St Clement, which adjoined the king's new dockyard at Deptford.[5] For many years, Trinity House depots were maintained in Harwich, Great Yarmouth, Penzance, Swansea, East Cowes and on the Thames (at Trinity Buoy Wharf, closed in 1988).

In December 2002 Trinity House announced that the Great Yarmouth, Penzance and East Cowes depots would close. Today Trinity House's operational headquarters is in Harwich, supported by depots in Swansea and a flight operations base at St Just. Its operations are also supported by three vessels; the two large tenders THV Patricia and THV Galatea, and the Rapid Intervention Vessel THV Alert. A small secretariat is based at Tower Hill.

Operational responsibilities and role of the corporation 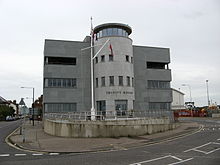 It no longer provides local pilots for entering ports. Contrary to popular belief Trinity House is not (and never has been) part of HM Coastguard although it does work closely with the Maritime and Coastguard Agency.

Trinity House's activities as a lighthouse authority are financed from “light dues” levied on commercial shipping calling at ports in the United Kingdom. 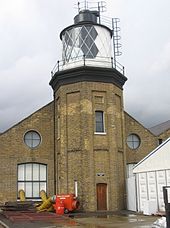 The surviving one of a pair of experimental lighthouses at Trinity Buoy Wharf, used by Michael Faraday and later used for training (closed 1988) 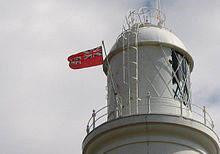 All lighthouses have been automated since November 1998, when the UK's last manned lighthouse, North Foreland in Kent, was converted to automatic operation. Lighthouse automation began as far back as 1910 thanks to an ingenious invention of Gustaf Dalén. His sun valve was fitted in a number of lighthouses powered by acetylene gas. The vital component was a black metal rod, which was suspended vertically and connected to the gas supply. As it absorbed the sun's heat, the rod expanded downwards, cutting off the gas during the day.[citation needed]

Automation in the modern context began in the early 1980s, made possible firstly by the construction of lantern top helipads at remote rock lighthouses, to enable the rapid transfer of technicians to a lighthouse in the event of a breakdown - and secondly, by the development of remote control technology which enables all lighthouses and lightvessels to be monitored and controlled from the Trinity House Operations and Planning Centre, in Harwich, Essex.[citation needed]

The other General Lighthouse Authorities in other parts of the British Isles:

Trinity House operates three vessels around the coast of England, Wales and the Channel Islands.[6]