Ballad of a Soldier

Ballad of a Soldier 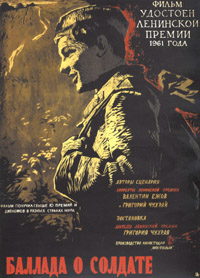 "Ballad of a Soldier", ( _ru. "Баллада о солдате", "Ballada o soldate") is a 1959 Soviet film directed by and starring Vladimir Ivashov and . The film is set during and shows how the Russian soldier Alyosha tries to make it home during a leave, meeting several civilians on his way and falling in love with Shura. The film was produced at and won several awards, including the BAFTA Award for Best Film from any Source and was nominated for the .

"Ballad of a Soldier" is not primarily a war film: it recounts, within the context of the turmoil of war, various kinds of love: the romantic love of a young couple, the committed love of a married couple, and a mother's love of her child. The film tells the story of the young soldier Alyosha Skvortsov (Vladimir Ivashov) making his way through the countryside during the first few months of the war at a time when the Soviet Union seemed destined to fall to the powerful Nazi onslaught. Awarded a six-day leave pass for destroying two German tanks, Alyosha makes his way home to visit his mother and to repair the roof of her home. During his journey he encounters the devastation the war has brought on the country and meets numerous people and gives them hope by virtue of his likeable and positive character. Riding in the baggage car of a train he meets Shura () and falls in love with her. As he had spend precious time on running errands for his fellow soldiers from the front, he arrives at his home only to see his mother for just a minute. He returns to front and, as we learn via voiceover, never comes back from the war.

The two lead actors Vladimir Ivashov and Zhanna Prokhorenko were both only nineteen years old and had not much acting experience at the time of the casting. Grigori Chukhrai's said about his casting choice: "We took a big risk. It was risky to give the main roles to quite inexperienced actors. Not many would have done so in those times, but we ventured and did not regret afterwards. Volodya and Zhanna gave the most precious colouring to the film, that is, the spontaneity and charm of youth". [cite web
last = Ivanova
first = Vera
authorlink =
coauthors =
title = Ballad of a Film-Director: Grigorii Chukhrai
work =
publisher = Russia-IC.com
date = April 27, 2006
url = http://www.russia-ic.com/culture_art/theatre/172/
format =
doi =
accessdate = 2008-04-13]

The film received considerable praise for both its technical craft and its strong, yet subtle story. Viewed from the earnestness and unabashed youthfulness of the protagonist, "Ballad of a Soldier" distanced itself from the fierce propaganda which bound other films before it. American critics, particularly, hailed it as an instant classic, with the New York Times offering it iconic status. [cite news|last=Crowther|first=Bosley|coauthors=|title=Movie Review: Ballad of a Soldier|work=|pages=|language=|publisher=|date=December 27, 1960|url=http://movies.nytimes.com/movie/review?_r=1&res=9F0DEEDD1531EF3ABC4F51DFB467838B679EDE&oref=slogin|accessdate=2008-04-13]