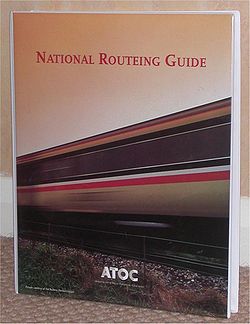 A copy of the 2002 edition of the National Routeing Guide.

The National Routeing Guide is a document, the definitive resource on the validity (and invalidity) of rail tickets for the purpose of rail travel in England, Wales, and Scotland (that is, the UK except Northern Ireland). As stated by the Rail Regulator, "[it] sets out passengers' rights to use the network flexibly[1]". It is a book produced by the ATOC, which should always be carried by any rail ticket inspector. It is also always on hand to staff at manned stations.

It is one of a number of technical railway manuals which exist as part of the operating of the rail network of Great Britain, many of which are now in the public domain.

Customers generally encounter the document in specific circumstances, when they wish to prove (or check) the validity of their ticket on a route which might at first not appear obvious. Since most rail travellers make 'simple' journeys, many will never encounter it. However, when making more complex journeys, it is important to stay "on route". The guide defines what this means. Individual tickets may restrict holders to a subset of the acceptable routes, usually by requiring them to travel through a particular station.

Issues of value to the traveller

"Ticketing arrangements on the UK's railways are notoriously arcane, but you can use the rules to get cheaper fares."

The routeing guide makes possible some of the recently publicised ticketing anomalies in the UK rail network such as saving money by purchasing tickets for long journeys as several discrete journeys instead, for example[3] As such it is a powerful tool in the arsenal of the knowing consumer, given the current complexity of ticket choice on the UK rail network. It is also important for travellers who contemplate a different route when faced with disruption; under these circumstances staff may stamp or sign a ticket as valid via a different route.

When it was introduced, its primary aim was to "provide passengers with certainty about what travel their ticket buys them[4]", after many years of ambiguity over 'reasonable' journeys, therefore passengers are now quite within their rights to use it as a point of reference, since it has been written and approved by the transport companies.

The primary concern of those travelling is staying on a route acceptable for the ticket they have purchased. The customer is always on-route if they can answer yes to at least one of the below, according to section A of the guide:

The full routeing guide is consulted only upon answering 'No' to both questions. This can occur when the customer wishes or needs to change trains several times, either with a view to travelling on a particular line (for example to connect with a faster train), or because of a desire to break a journey at a given station not directly on the 'expected' route.

Passing through the same station twice is almost always forbidden, except where a rule or 'easement' allows for it.

These easements are exceptions to the acceptable routes which are otherwise explicitly defined, and are listed in Section E of the Guide for easy reference. They are simple to understand one-line rules, and exist to ensure that in most circumstances the simplest journey is acceptable. For example, the "no doubling back" rule normally requires travellers changing from one line to another to change at the junction station. However, such stations are often small and poorly served, so local easements often exist to allow travel to the nearest major station. In many cases this enables the traveller to remain on 'fast' services.

"Easement 61: Journeys to St Ives ... from stations east of St Erth may go via Penzance. This applies in both directions."

Others are matters of convenience:

"Easement 20010: Passengers using the sleeper northbound from Euston may start their journey with a cross London service."

Some easements are negative, forbidding a route that might otherwise be acceptable.

The relevant section of the Guide currently available at the ATOC website details more than one hundred different easements.

Train Operating Companies may make special arrangements for disabled passengers, who have further exemptions on an individual case basis. This allows for different routes in certain situations, such as where normal practice is to walk between two nearby stations on different lines to catch a connecting train, which wheelchair users might find difficult. There are however no clear stated rules for defining what is "reasonable" for disabled people—this is presumably a matter of discretion. Some journeys must involve walks of up to 10 minutes in some cases between stations to make a connection (e.g. Farnborough (Main) to Farnborough North, Ash Vale to North Camp)

Three types of routes are acceptable: direct trains, shortest route, or mapped routes. The first two are simple and outlined above. Almost the whole of the routeing guide is taken up with specifying the third for the entire country.

Journeys The rules can be summarised thus:

The guide allows many journeys which one might not expect. Travelling from Cardiff to Cambridge via Swansea, Shrewsbury, and Birmingham is acceptable, for instance, rather than simply via London. Generally there are a large number of permitted routes which are rarely used because they are inconvenient, but which are nevertheless legitimate. Some travellers have reported being charged extra for 'special' routes, however.

The ATOC maintains the National Routeing Guide as an online program[1], which some find helps calculate valid routes. Others find the rather basic site confuses matters, and prefer to use the 'paper' guide which ATOC makes available for download as a PDF document[2]. The online program appears no longer to be available according to a discussion in July 2009[5].

The rail network is complex, and the routeing guide an inherited document, not one designed from scratch. As a nodal network, the rail system lends itself to logical computer analysis. Accordingly, under such detailed analysis by enthusiasts, the routeing system has been found to contain many idiosyncrasies. An infamous example is the following query and response sent to customer services: "What are the permitted routes where a ticket is routed 'not London'; in particular, what if the only route given in the Guide is [via] 'London'? A: In this case, you can use the ticket via London. The routes 'London' and 'not London' are not necessarily mutually exclusive." The latter sentence clearly defies logical explanation.

At one point the guide also permitted legitimate travel on a London to Carlisle ticket via Inverness, on a similar technicality, (travelling up the East coast, down the West, never needing to double back) though it is unknown whether anyone actually made such a journey. Other anomalies include the apparent option of using a cross-London ticket to travel via Cambridge.

The routeing guide now being available in computer form means that the traveller is one step removed from the rules of the system. In many cases the program produces results which cannot be explained by the PDF version's rules, and whilst the site implies the two are identical, the ATOC maintains the program provides the definitive answer as it is more recent.[6] This has generated some protest on occasion, given that the queries into the system's working produces illogical results. As all travellers have a legal obligation to travel using a valid ticket, as the ticket forms part of a contract between traveller and train company (along with the National Rail Conditions of Carriage and the National Fares Manual), there is a sound argument that the principles of the routeing guide should be publicly available to enable compliance - a primary principle of contract law is that the terms of the contract must be known to all parties and available for scrutiny.

The ATOC's reluctance to answer questions about anomalies is often taken as confirmation of the opinion that the routeing guide consists of guidelines than actual rules on the finer points of logic.