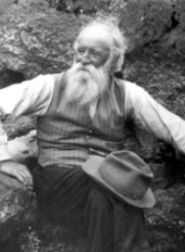 image_size = 185px
caption = John Burroughs
birth_date = birth date|1837|4|3
birth_place =
death_date = death date and age|1921|3|29|1837|4|3
death_place = on a train near
other_names =
known_for =
occupation = , , naturalist
nationality = John Burroughs (, -, ) was an American naturalist and important in the evolution of the U.S. . According to biographers at the project at the ,John Burroughs was the most important practitioner after of that especially American literary genre, the nature essay. By the turn of the century he had become a virtual cultural institution in his own right: the Grand Old Man of Nature at a time when the American romance with the idea of nature, and the American conservation movement, had come fully into their own.

His extraordinary popularity and popular visibility were sustained by a prolific stream of essay collections, beginning with "Wake-Robin" in 1871.

In the words of his biographer , Burroughs's special identity was less that of a scientific naturalist than that of "a literary naturalist with a duty to record his own unique perceptions of the natural world."

The result was a body of work whose perfect resonance with the tone of its cultural moment perhaps explains both its enormous popularity at that time, and its relative obscurity since.

Burroughs was the seventh child of Chauncy and Amy Kelly Burroughs' ten children. He was born on the family farm in the , near , . As a child he would spend many hours on the slopes of , looking off to the east and the higher peaks of the Catskills, especially Slide Mountain, which he would later write about. His classmates at a local school included .

He left school at the age of 17 to become a teacher, while he continued his studies at a number of institutions including Cooperstown Seminary. There he first read the works of and , both of whom would become lifelong influences through their focus on nature and its effect on the spirit. He left seminary in July 1856 and made his way to the small village of Buffalo Grove in . There he taught until the following year, but would return East to marry "the girl I left behind me".

On , , he married Ursula North (1836-1917). He continued his teaching career with an eye toward becoming a published author. The couple struggled financially and were not able to set up their own household until 1859.

The next year he finally got a small break as a writer, when the "", then a fairly new publication, accepted his essay "Expression." (Editor found it so similar to Emerson's work that he initially thought Burroughs had plagiarized his longtime acquaintance.) A short poem, "Waiting", also attracted some attention.

In 1864, Burroughs accepted a position as a clerk at the Treasury; he would eventually become a federal bank examiner, continuing in that profession into the 1880s. All the while, he continued to publish, and grew interested in the poetry of . Burroughs met Whitman during the Civil War in Washington, and the two became close friends.

Whitman encouraged Burroughs to develop his nature writing as well as his philosophical and literary essays. In 1867, Burroughs published "Notes on Walt Whitman as Poet and Person", the first biography and critical work on the poet, which was extensively (and anonymously) revised and edited by Whitman himself before publication.

In 1874, Burroughs bought a big farm in West Park, NY (now part of the Town of Esopus). Here he grew a host of crops before eventually focusing on fancy table grapes, and devoted himself to his writing while also continuing to labor, for several more years, as a federal bank examiner. This may be the property named .

Later, he bought some land nearby and in the fall of 1894, began work with his son Julian Burroughs (-,) on an cabin that would be called "". At Slabsides he wrote, grew a large field of celery, and entertained visitors, including students from local .

After the turn of the century, Burroughs renovated an old farmhouse near his birthplace and called it "." This became his summer residence until his death.

He wrote more than 30 books, and published hundreds of essays and poems in magazines. His achievements as a writer were confirmed by his election as a member of the . [ [http://query.nytimes.com/mem/archive-free/pdf?res=9802E6D81E30E633A2575AC1A9679D946095D6CF "Academy Honors John Burroughs; Naturalist Praised by Bliss Perry and Hamlin Garland at Memorial Meeting,"] "New York Times." November 19, 1921.]

Some of the best essays came out of trips back to his native Catskills. In the late 1880s, in the essay "The Heart of the Southern Catskills," he chronicled an ascent of Slide Mountain, the highest peak of the Catskills range. Speaking of the view from the summit, he wrote: "The works of man dwindle, and the original features of the huge globe come out. Every single object or point is dwarfed; the valley of the Hudson is only a wrinkle in the earth's surface. You discover with a feeling of surprise that the great thing is the earth itself, which stretches away on every hand so far beyond your ken." Some of these words are now on a plaque commemorating Burroughs at the mountain's summit, on a rock outcrop known as Burroughs Ledge. Slide and neighboring "Cornell" and "Wittenberg" mountains, which he also climbed, have been collectively named the Burroughs Range.

Other Catskill essays told, with as much wry humor as awestruck reverence, of for , of hikes over Peekamoose Mountain and Mill Brook Ridge, and of rafting down the East Branch of the . It is for these that he is still celebrated in the region today, and chiefly known, although he traveled extensively and wrote about many other regions and countries, as well as commenting on natural-science controversies of the day such as the relatively new theory of . He also entertained philosophical and literary questions as well, and wrote another book about Whitman in 1896, four years after the poet's death. Ultimately his writing helped persuade the literary establishment of Whitman's virtues.

From his youth, Burroughs was an avid fly fisherman and well known among the more famous Catskill anglers [cite book |last=Karas |first=Nick |title=Brook Trout: a Thorough Look At North America's Great Native Trout - its History, Biology and Angling Possibilities |publisher=Lyons & Burford |location=New York |year=1997 |pages=199-201 |isbn=1558214798] . Although he never wrote any purely fishing books, he did contribute some notable fishing essays to angling literature. Most notable of these was "Speckled Trout" which appeared in the Atlantic Monthly in October 1870 and was later published in "In The Catskills." The "Speckled Trout" essay highlights Burroughs experiences as an angler and celebrates the trout, streams and lakes of the Catskills. [cite book |last=Burroughs |first=John |title=In the Catskills |publisher=Houghton Mifflin Company |location=New York |pages=187-219 |year=1910] .

Burroughs accompanied many personalities of the time in his later years, including , , (who gave him an automobile, one of the first in the ), , and . Most notably, in 1899, he participated in 's expedition to Alaska.

From the beginning of his marriage to Ursula, the couple had been incompatible due to his wife's extreme aversion to physical relations. In 1901, Burroughs met an admirer, Clara Barrus (1864-1931). She was a physician with the state psychiatric hospital in Middletown, N.Y. Clara was 37 and nearly half his age. She was the great love of his life ["Walt Whitman: An Encyclopedia" ed. J.R. LeMaster, p. 90 "Burroughs and Ursula" Carmine Sarracino, pub. Routledge, 1998] and ultimately his literary executrix. She moved into his house after Ursula died in 1917.

He died on a train returning from California in the spring of 1921. He was buried in Roxbury, on the anniversary of his 84th birthday, at the foot of a rock he had played on as a child.

Burroughs was a popular and highly regarded author in his day. An award for nature writing has been named for him, along with 11 U.S. schools, including public middle schools in and (John Burroughs Middle School), a public high school in , Burroughs Elementary in , and a private secondary school in .

Many of Burroughs' essays first appeared in popular magazines. He is best-known for his observations on birds, flowers and rural scenes, but his essay topics also range to religion and literature. Burroughs was a staunch defender of and , but somewhat critical of .

Since his death in 1921, John Burroughs has been commemorated by the .