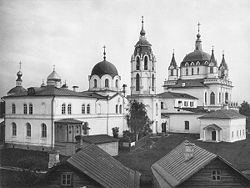 The first church and convent for women on the site of present-day monastery was laid down by Saint Alexis (1304–1378, born Eleuthery Byakont, later Alexis, Metropolitan bishop of Moscow) in 1360 in the name of Conception of Saint Anne. Alexis (Alekseevsky) convent housed Eupraxia and Iuliania, sisters of Alexis (both canonized by Russian Orthodox Church in 2001).[1]

After the Fire of Moscow (1547), Alexis convent relocated to the site of present-day Cathedral of Christ the Saviour. Conception Convent was established on the old site in 1584 by childless Feodor I of Russia and his wife, Irina Godunova.[2] Soon, it was looted and damaged during the Time of Troubles. 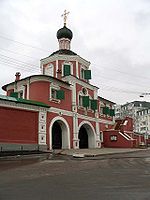 Extant barbican church was built in 1696, financed by Rimsky-Korsakov family. This church and walls are the only remains of the Convent as it existed before the Russian Revolution of 1917. The main Neo-gothic Nativity cathedral, built in 1804-1807 and attributed to Matvey Kazakov, was torn down in 1924. Fortified convent itself served as a juvenile prison, later, the city built a red brick School No.36 on site of old cathedral. Its principal relic, icon of Theotokos the Merciful, was saved at nearby Church of Elijah.

Efforts to restore the Convent began in 1991; the new institution was established by Patriarch in May 1995. By 2005, church of St.Anne (third from right on the 1882 photograph) was completed; the Convent, backed by the City of Moscow, is raising funds to rebuild the main cathedral. However, recent publications assert that the Church deems the historical Gothic style improper and the new cathedral will be built in traditional Russian style.[3] Draft, published by architect Ilia Utkin, proposes excavating the earth around old foundations, and locking these historical ruins under a raised sarcophagus slab. The new five-domed church, taller than the old cathedral, will rest on this slab, unlinked from historical foundations.[4] In October 2006, Yuri Luzhkov approved a similar concept by Alexander Obolensky, but required decrease of new cathedral height.[5]

As of June, 2009, the new cathedral, made of in situ concrete, is structurally complete. On November 25, 2010 the Cathedral of the Nativity of Our Lady was consecrated.

Convent territory is open for general public in daytime, until the end of 5pm Vespers, with certain limitations; photography inside the walls requires prior consent of hegumenia Iuliania.