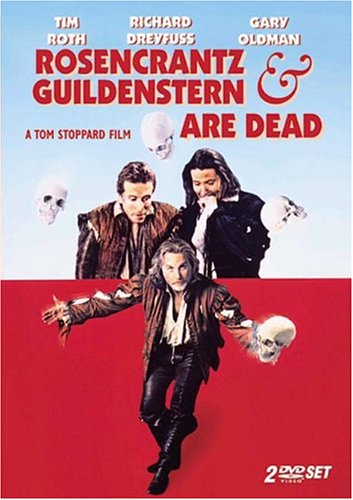 "Rosencrantz & Guildenstern Are Dead" is a written and directed by based on his play of the same name. It was filmed in , . Like the play, the film depicts two minor characters from 's play "", , who find themselves on the road to at the behest of the . They encounter a band of players before arriving to find that they are needed to try and discern what troubles the prince Hamlet. Meanwhile, they ponder the meaning of their existence.

The film stars as Rosencrantz, as Guildenstern and as the leading player. It also features as , as Gertrude and as . The film was shot in various locations around the former Yugoslavia. This was Stoppard's debut as a film director, and to date it remains his only film directorial credit.

The film, like the play, focuses on Rosencrantz (Gary Oldman) and Guildenstern (Tim Roth) and their actions (or lack thereof) within the play of Hamlet. The film begins with their trip to Elsinore, where they seem to have forgotten why they were travelling. Rosencrantz continually flips a coin, which always comes up heads. He concludes that something is wrong with reality, possibly echoing Hamlet's "Time is out of joint." They continue (after deciding where they are going and why) with some haste, only to be stopped by a troupe of tragedians. During their conversation with the lead Player (Richard Dreyfuss), they are mysteriously swept into the action of "Hamlet". They wander around the castle, trying to catch up to the action and figure out what is going on by listening to other parts of the play. They spend their time outside of the scenes in "Hamlet", trying to figure out what is wrong with the prince and what is required of them. Finally, they are sent to England and outside the action of the play again. The final part takes place on the boat to England, where they read the letter they are to deliver with Hamlet -- discovering that it is an order for his death. They decide to pretend they never saw it. Hamlet replaces the letter, and (as described in Shakespeare's play) escapes on an attacking pirate ship. Rosencrantz and Guildenstern worry about what they are to do now that Hamlet is gone, unaware that the letter has changed. The Player finishes the action by reading the letter that sentences them to death.

The film was released on DVD in 2005, featuring interviews with Oldman, Roth, Dreyfuss and Stoppard.

*Richard Dreyfuss' part was initially going to be played by who instead took a part in "The Hunt for Red October".
*The pieces of paper blowing around in the movie, including the scrap with which Rosencrantz makes a paper airplane, are actually the script of Shakespeare's "". Of course, the title duo fails to notice this.
*The opening song at the beginning of the movie is 's Seamus (Meddle, 1971). [Rosencrantz & Guildenstern Are Dead Facts at Imdb's http://www.imdb.com/title/tt0100519/trivia ]