A new terminal replaces the previous airport terminals, which lie just across it, in handling both domestic and international flights operating to and from Davao. The modern facility is designed to handle approximately 2 million passengers annually and 84,600 metric tons of cargo annually. The added capacity is also complemented by the latest navigational, security, and baggage handling equipment.

The modernization and upgrading of the airport facilities aims to cement Davao as a hub for tourism and foreign investment in the region. Development was funded by a forty million-dollar loan from the Asian Development Bank, co-financed by the European Investment Bank for twenty-five million ECUs, and through budgetary allocations from the government. The total cost of the project amounted to $128 million.

After almost a decade, the new terminal was finally inaugurated on December 2, 2003. Initial construction began in 2000 while plans for construction were announced in 1992.

Despite the fact that Davao International Airport is considered "international", it currently services only one international destination, Singapore. However, there are occasional charter flights to Davao from Manado, Indonesia by Wings Air and Davao from Seoul, South Korea by Jeju Air.[3] Cebu Pacific used to serve Davao-Hong Kong and Singapore, however these flights have been discontinued in 2009.[4] But an Executive Order of Pocket Open Skies Policy is now being reviewed by the Philippine Government which would allow foreign carriers to operate at Davao International Airport.[5] 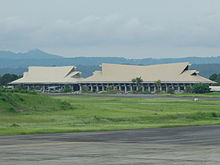 The airport's old terminal buildings were in use until 2003.

Francisco Bangoy International Airport began operations in the 1940s with a donation of land in Barangay Sasa, located in the Buhangin district of Davao City, by Francisco Bangoy, the patriarch of an influential family residing in the city. At the time it began operation, the airport merely consisted of a 1,200-meter unpaved grass runway and quonset huts serving as terminal buildings. At the time, and throughout much of the 1940s and 1950s, both Philippine Airlines and the Philippine Air Force provided air service to the city.[6]

By 1959, the complex consisted of a small control tower and several low-rise buildings. A new terminal designed by Filipino architect Leandro Locsin, with a capacity of one million passengers, was constructed in 1980 and the runway was progressively extended from its original length of 1,200 meters to its current 3,000 meters. Both projects were funded during the term of then-Congressman Manuel Garcia, whose congressional district covers the airport perimeter.[6]

Rapid growth at the airport precipitated the construction of a P15 million interim international terminal beside the airport's then-existing terminal,[6] and then eventually a new, larger terminal building which would consolidate the two existing terminals. In planning since 1992, construction began in 2000 and subsequently inaugurated on December 2, 2003, with a capacity double that of the old airport terminal. The construction of the new P2.7 billion building was funded by both the Asian Development Bank and the European Investment Bank.[6]

The Civil Aviation Authority of the Philippines (CAAP) said that it will immediately upgrade and modernize 5 alternate international airports in line with the administration’s call for “pocket open-skies” policy to attract more tourists. This includes Davao International Airport, among others. The 5 airports have existing frontline facilities related to Customs, Immigration and Quarantine. Airlines like Japan based All Nippon Airways, Korean Air subsidiary Jin Air and Air Asia Philippines showed interest in flying to these airports internationally.[7]

Old Airport will be rehabilitated

The old airport in Sasa might be reopened as a satellite facility to latch into the ASEAN connectivity program, an official of the Davao City Chamber of Commerce and Industry Inc. (DCCCII) revealed. Maria Lourdes G. Monteverde, president of DCCCII, said yesterday during the weekly Club 888 forum at Marco Polo Davao Hotel that it is one of the strategies brought up during a meeting with the Civil Aviation Authority of the Philippines area manager Frederick G. San Felix Jr. and tourism regional director Arturo P. Boncato Jr. last week. Monteverde added that they are ready with infrastructure, adding that the existing airport will also be rehabilitated.[8]

Four international budget airlines have signified their intention to service Davao City for direct flights in other Asian destinations. One airline plans to open direct flights between Davao City and Singapore,according to Sebastian L. Angliongto, chair emeritus of DCCCII, although he declined to give the name of the company.

The P2.7 billion passenger terminal is a Malay architecture-inspired building which is four times larger than the old terminal. It is highly computerized, more secure and has more commercial spaces for concessionaries at approximately 9,000 sq. meter. It has four units of jet bridges for passengers. It has also a Flight Information Display System and Closed Circuit Television System complementing the terminal's security system.

The terminal has 14 domestic and 14 international check-in counters that can handle a steady flow of passenger traffic. The Check-in counters are equipped with electronic weighing scales and conveyors and its baggage handling system is also computerized. It also has 2 arrival areas, for domestic and international with 2 baggage conveyors each. The Cargo Terminal Building covers almost 5,580 sq. meters and can handle up to 84,600 metric tons of cargo a year.[9] 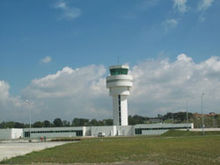 The airport's Air Traffic Control Tower is considered as one of the most sophisticated in the Philippines.

The airport has a single 3,000-meter long runway that can handle wide-bodied aircraft such as the Airbus A330, the Airbus A340, Boeing 747 and even Airbus A380. The installation of a new instrument landing system (ILS) for both Runways 05 and 23 upgraded its compliance to International Civil Aviation Organization (ICAO) operating category-Precision Approach Category 1. It can accommodate 8-10 aircraft landings per hour, depending on size and has the equivalent 8 gate holding areas for those aircraft.[9] The airport has also 2 dual access taxiway [taxiway A3 and taxiway A4 is used to access the new ramp and terminal; taxiway B and taxiway C is used for access to the old airport ramp].[10]

Besides the main terminal building, there are also new support facilities like the Administration Building, Airfield Maintenance Building, Central Plant Building, Hangar for Military and Training aircraft and Fire/Crash/Rescue Building. It has a 688-slot car parking area and 4 slots for shuttle buses. It has a 3-megawatt standby power generator. The Air Traffic Control tower is considered as the most advanced in the Philippines.[9] There are also 2 Mabuhay lounges of Philippine Airlines inside the airport premises. 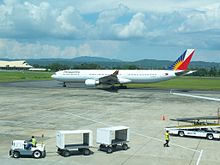 A Philippine Airlines' Airbus A330-300, taxiing at the tarmac. 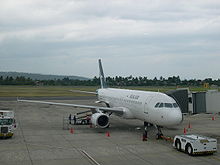