Hitachi Maxell, Ltd. (日立マクセル, Hitachi Makuseru?) , commonly known as Maxell, is a Japanese company which manufactures consumer electronics. The company's notable products are batteries -- the company's name is a contraction of "maximum capacity dry cell" -- and recording media, including audio cassettes and blank VHS tapes, and recordable optical discs like CD-R/RW and DVD±RW. But the company also sells electronics and several kinds of accessories, ranging from CD and DVD laser cleaners to storage boxes.[1] On March 4, 2008 Maxell announced that they would no longer manufacture their optical media, but would start contracting other companies to manufacture Maxell media.[2] 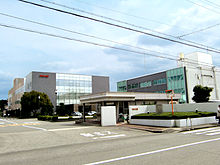 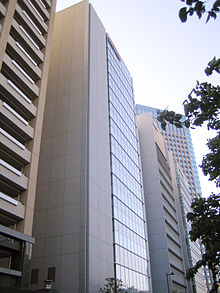 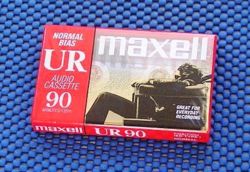 The packaging of an unopened Maxell UR (type I) cassette tape. Note the famous Maxell marketing image: a man with his hair, necktie and drink being blown back by the sound from a speaker.

In the 1980s, Maxell became an icon of pop culture when it produced advertisements popularly known as "Blown Away Guy" for its line of audio cassettes. The original campaign began as a trade ad in 1980 and was made into TV spots in 1979 which ran throughout the 1980s. Steve Steigman was the photographer[3] and Richard Wagner's "Ride of the Valkyries" was used for music. In the UK the music used was "Night on Bald Mountain" by Modest Mussorgsky.

The ads depict a man sitting low in a (Le Corbusier) LC2 high armed chair (on the right side of the screen) in front of, and facing, a JBL L100 speaker (the left side of the screen). His hair and necktie, along with the lampshade to the man's right and the martini glass on the low table to the man's left, are being blown back by the tremendous sound from speakers in front of him — supposedly due to the audio accuracy of Maxell's product. He is shown desperately clinging to the armrests but defiantly looking ahead at the source of the music through sunglasses, though calmly catching his drink before it slides off the end table. Television commercials showed the chair, as well as a drink and nearby lamp, moving back away from the stereo by the strong force of the sound waves. The image became the de facto standard of those who believed their stereo equipment had sufficient power or accuracy to move the mind and the soul. The model for the UK (not US) ad campaign was musician Peter Murphy of the group Bauhaus. The model for the US campaign, however, was the makeup artist hired for the shoot by photographer Steve Steigman.[4] The impact of the advertising campaign on popular culture still resonates today: "Blown Away Guy" was recently parodied on the popular animated television show "Family Guy" in the episode "Model Misbehavior". This is only the most recent in countless parodies over the years, which includes a parody in the John Ritter film Stay Tuned, (which featured a character's head being blown off by a "Max-Hell" tape). In the 2010 movie Jackass 3D, the commercial is parodied with Ryan Dunn sitting in the chair, while the blast from a Jet Engine send the set blowing away.

The original soundtrack of the first TV ad read, "After 500 plays, Maxell still delivers high fidelity." This durability and quality message did not have the staying power of the "blow away" image, which still lives today.

On December 12, 2005, Maxell decided to bring "Blown Away Guy" back due to its popularity.[5] As Maxell now makes blank DVDs and CDs, headphones and speakers in addition to mainstays such as blank audio and video tape, the ads have been updated with photos of iPods and accessories underneath the image. "Get blown away" is the headline while copy urges consumers to use Maxell accessories to "make your small iPod sound like a huge audio system."

The music video for P. Diddy's song 'Tell Me', is somewhat reminiscent of the "Blown Away Guy" ad. 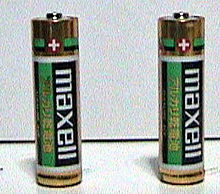 Hitachi Maxell, along with Nagasaki University, NIAIST, and Fuji Heavy Industries (the parent company of Subaru, makers of the R1e electric car), has developed a new chemistry for lithium-ion batteries. Part of the change is dropping the expensive cobalt element and using "nano-infused lithium" with manganese, with 20 times more power storage, and the ability to mass-produce it inexpensively.[6]

During the height of the Compact Audio Cassette's popularity, Maxell's audio cassettes were held in high regard, producing some of the finest examples of the standard available. The performance of the XLIIS (CrO2) and MX (pure metal particles) cassettes was regarded by many to be the ultimate achievement in the pre-digital domestic recording medium. 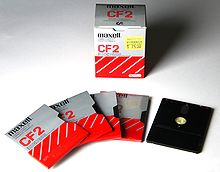 Maxell also produced floppy disks in the unusual 3" format, which came to be used in computers such as the Amstrad CPC line. Compared to 3.5" floppies, they are thicker and the metal cover protecting the disk is inside the plastic casing, not outside. Typical data carrying capacity was about 180 kB on each side.

Apart from Amstrad's other 3" machines (the PCW and the ZX Spectrum +3), the few other computer systems to use these disks included the Sega SF-7000 and CP/M systems such as the Tatung Einstein and Osborne machines. They also found use on embedded systems.

The 3" disks themselves were usually known as "discs" on the CPC, following the spelling on the machine's plastic casing and conventional non-American spelling.