The famously named "Ring Nebula" (also catalogued as Messier 57, M57 or NGC 6720) appears in the northern constellation of Lyra and is located in the Carina–Sagittarius Arm.[citation needed] It is one of the most prominent examples of a planetary nebula, the gaseous remains of a red giant star that has ended its life by expelling its material into the surrounding interstellar medium.

This nebula was discovered by Antoine Darquier de Pellepoix in January, 1779, who reported that it was "...as large as Jupiter and resembles a planet which is fading." Later the same month, Charles Messier independently found the same nebula while searching for comets. It was then entered into his catalogue as the 57th object. Messier and William Herschel also speculated that the nebula was formed by multiple faint stars that were unable to resolve with his telescope.[5][6]

In 1800, Count Friedrich von Hahn discovered the faint central star in the heart of the nebula. In 1864, William Huggins examined the spectra of multiple nebulae, discovering that some of these objects, including M57, displayed the spectra of bright emission lines characteristic of fluorescing glowing gases. Huggins concluded that most planetary nebulae were not composed of unresolved stars, as had been previously suspected, but were nebulosities.[7][8] 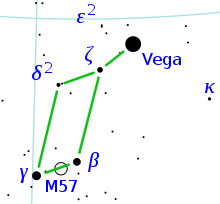 Location of M57 in the constellation Lyra.

M57 is located south of the bright star Vega, which forms the northwestern vertex of the Summer Triangle asterism. It lies midway between β and γ Lyrae, making it an easy target for amateur astronomers.[9]

The nebula is best observed using apertures of at least 20 cm (8-inches), but even a 7.5 cm (3-inch) telescope will reveal its elliptical ring shape.[9][10] Larger instruments will show a few darker zones on the eastern and western edges of the ring, and some faint nebulosity inside the disk. The central star, at magnitude 14.8, is difficult to spot.[10] 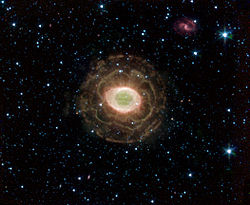 The Ring Nebula in infrared.

M57 is 0.7 kpc (2,300 light-years) from Earth.[3] It has a visual magnitude of 8.8v and photographic magnitude of 9.7p. Photographically, over a period of 50 years,[11] the rate of nebula expansion is roughly 1 arcsecond per century, which corresponds from spectroscopic observations to 20–30 km−1). M57 is illuminated by a central white dwarf or planetary nebula nucleus (PNN) of 15.75v visual magnitude,[12] whose mass is approximately 1.2 MΘ (in solar masses.)

All the interior parts of this nebula have a blue-green tinge that is caused by the doubly ionized oxygen emission lines at 495.7 and 500.7 nm. These observed so-called "forbidden lines" occur only in conditions of very low density containing a few atoms per cubic centimeter. In the outer region of the ring, part of the reddish hue is caused by hydrogen emission at 656.3 nm, forming part of the Balmer series of lines. Forbidden lines of ionized nitrogen or [N II] contributes to the reddishness at 654.8 and 658.3 nm.[11]

M57 is an example of the class of planetary nebulae known as bipolar nebulae, whose thick equatorial rings visibly extend the structure through its main axis of symmetry. It appears to be a prolate spheroid with strong concentrations of material along its equator. From Earth, the symmetrical axis is viewed at about 30°. Overall, the observed nebulosity has been currently estimated to be expanding for approximately 1,610±240 years.

Structural studies find this planetary exhibits knots characterized by well developed symmetry. However, these are only silhouettes visible against the background emission of the nebula's equatorial ring. M57 may include internal N II emission lines located at the knots' tips that face the PNN; however, most of these knots are neutral and appear only in extinction lines. Their existence shows they are probably only located closer to the ionization front than those found in the Lupus planetary IC 4406. Some of the knots do exhibit well-developed tails which are often detectable in optical thickness from the visual spectrum.[2][13]

The central PNN was discovered by Hungarian astronomer Jenő Gothard on September 1, 1886 from images taken at his observatory in Herény, near Szombathely (now part of Szombathely). Within the last two thousand years, the central star of the Ring Nebula has left the asymptotic giant branch after exhausting its supply of hydrogen fuel. Thus it no longer produces its energy through nuclear fusion and, in evolutionary terms, it is now becoming a compact white dwarf star.

The PNN now consists primarily of carbon and oxygen with a thin outer envelope composed of lighter elements. Its mass is about 0.61–0.62 solar mass, with a surface temperature of 125,000±5,000 K. Currently it is 200 times more luminous than the Sun, but its apparent magnitude is only +15.75.[12]