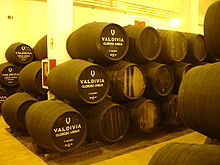 Barrels of Oloroso at Valdivia

Oloroso ("scented" in Spanish) is a variety of sherry produced by oxidative aging. It is normally darker than amontillado and has a higher glycerine content, which makes it smoother and less dry. Oloroso is usually dark and nutty.

Unlike the fino and amontillado sherries, in oloroso sherries the flor yeast is suppressed by fortification at an earlier stage. This causes the finished wine to lack the fresh yeasty taste of the fino sherries. Without the layer of flor, the sherry is exposed to air through the slightly porous walls of the American or Canadian oak casks, and undergoes oxidative aging. As the wine ages, it becomes darker and stronger and is often left for many decades.

Oloroso sherry is also the base for many of the sweet sherries developed for the international market, such as Bristol Cream, in which oloroso is sweetened and sometimes has the colour removed by charcoal filtering to achieve a desired effect.

Dry olorosos should be served at 12-14°C, and can be served as an apéritif with nuts, olives or figs, with game and red meats, or after a meal with rich cheeses. It can also be taken as a long drink with ice.

Sweetened olorosos, (produced by blending with Pedro Ximénez wine), should also be served at 12-14°C and are usually served after a meal as a dessert wine. They can also be served with certain dishes, such as foie gras.

Because oloroso sherries have already been through years of oxidative aging, they can be safely stored for years before opening. Once opened, oloroso will begin to slowly lose some of its aroma and flavour but can be kept, corked and refrigerated, for up to two months after opening. The older the oloroso, the longer it will stay perfect for consumption, as much as 12 months.

When the casks used to age oloroso sherry are retired, they are often sent to Scotland, where they are used to age fine Scotch whisky. Single malt whisky aged in sherry casks is regarded by some as a special category with its own aficionados. The oloroso wine infused in the wood of the casks imparts some of the flavor and aroma of the wine to the whisky during the aging process. Oloroso casks are also used to age brandy for the same reasons.