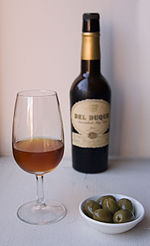 A glass of amontillado sherry

Amontillado is a variety of sherry, characterized by being darker than fino but lighter than oloroso. It is named for the Montilla region of Spain, where the style originated in the 18th century, although the name 'amontillado' is sometimes used commercially as a simple measure of colour to label any sherry lying between a fino and an oloroso. An amontillado sherry begins as a fino, fortified to approximately 13.5 percent alcohol with a cap of flor yeast limiting its exposure to the air. A cask of fino is considered to be amontillado if the layer of flor fails to develop adequately, is intentionally killed by additional fortification or is allowed to die off through non-replenishment. Without the layer of flor, amontillado must be fortified to approximately 17.5 percent alcohol so that it does not oxidise too quickly. After the additional fortification, amontillado oxidises slowly, exposed to oxygen through the slightly porous American or Canadian oak casks, and gains a darker colour and richer flavour than fino.

Amontillado is usually served slightly chilled, and may be served either as an apéritif, or as an accompaniment to food such as chicken or rabbit. Classically it was served with a fine, or thin, soup, like a beef consommé.

Due to its oxidative aging and preparation, amontillado is more stable than fino and may be stored for a few years before opening. After opening, it can be kept for up to two weeks, if corked and refrigerated.

Amontillado is almost solely known outside of wine circles for its use in the title of Edgar Allan Poe's short story, "The Cask of Amontillado".[1][citation needed] It is also used in works such as Isak Dinesen's Babette's Feast[2] and Ben Bova's Grand Tour novel series.[3][4][5]

The album Tales of Mystery and Imagination by The Alan Parsons Project is based on the works of Edgar Allan Poe, and features the song "The Cask of Amontillado" based on the aforementioned short story. Lou Reed's 2003 album The Raven also features a song based on the work, titled "The Cask".

The 1987 film Babette's Feast features a scene in which amontillado is served with turtle soup at the titular feast. The character of General Lorens Löwenhielm comments on the wonders of the drink poured for him. Episode 36 of Monty Python's Flying Circus features a vicar who is obsessed with sherry, and more specifically amontillado. It ends with a group of traditionally-dressed Spanish musicians singing a song praising amontillado. The main characters of the series Frasier often drink sherry, and in the episode "Fathers and Sons", Frasier describes an Andalusian Amontillado.