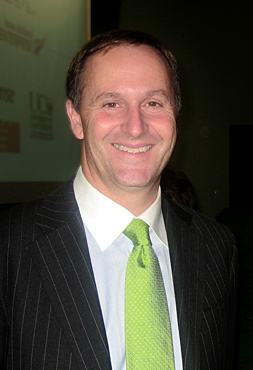 John Phillip Key (born ) is a politician, and member of the , representing the north-west constituency of Helensville. He is the current Parliamentary leader of the National Party and, by virtue of this position, the current Leader of the Opposition.

Key was born in , , to George Key and Ruth Key (née Lazar). His father died of a heart attack in 1967. Key and his two sisters were raised in a single-parent home in a state house in by his n-ish immigrant mother.

He attended , and earned a degree in from the in 1981. He has attended management studies courses at , although he did not receive a degree from this institution.

His first job was in 1982 as an auditor at McCulloch Menzies, and he then moved to be a project manager at Christchurch-based clothing manufacturer Lane Walker Rudkin for two years. [cite news |url=http://www.nzherald.co.nz/section/11/story.cfm?c_id=11&objectid=10486477 |title=My Job: John Key, Leader of the National Party |work= |date= |author=Donna McIntyre] Key began working as a foreign exchange dealer at Elders Finance in Wellington, and rose to the position of head foreign exchange trader two years later, then moved to Auckland-based Bankers Trust in 1988.

In 1995, he joined as head of Asian foreign exchange in Singapore. That same year he was promoted to Merrill's global head of foreign exchange, based in London, where he may have earned around US$2.25 million a year including bonuses, which is about NZ$5 million at 2001 exchange rates. Some co-workers called him "the smiling assassin" for maintaining his usual cheerfulness while sacking dozens (some say hundreds) of staff after heavy losses from the in 1998.

In 2001, on learning of his interest in pursuing a political career, the National Party president John Slater worked actively to recruit him. Former party leader describes him as one of the people she "deliberately sought out and put my head on the linendash either privately or publiclyndash to get them in there".

Key met his wife Bronagh when they were both students at Burnside High School. They married in 1984. She also has a BCom degree, and worked as a personnel consultant before becoming a full-time mother. They have two children, Stephie and Max.

Auckland's population growth, as evidenced in the 2001 census, led to the creation of a new electorate called Helensville, which covered the north-western corner of the Auckland urban area. Key beat long-serving MP (whose own seat had been rendered a safe Labour seat by the boundary changes) for the preselection. At the 2002 elections Key won the seat with a majority of 1,705, ahead of Labour's Gary Russell, with Neeson, now standing as an independent, coming third.

In 2004, Key was promoted to the Opposition front benches by then leader Dr , and made the party spokesman for finance. In late 2006 Brash resigned as leader, citing damaging speculation over his future as the reason. His resignation followed controversies over an extramarital affair, and over leaked internal National Party documents which were later published in the book "The Hollow Men". [cite news |author=NZPA, NZHerald Staff |title=Don Brash gone at lunchtime |url=http://www.nzherald.co.nz/section/1/story.cfm?c_id=1&objectid=10412121&pnum=0 |publisher= |date=23 November 2006 |accessdate=2007-08-26]

Leader of the Opposition

In his maiden speech as leader on , , Key talked of an "underclass" that had been "allowed to develop" in New Zealand, a theme which received a large amount of media coverage.

He relented on his stance in opposition to 's , which sought to remove "reasonable force" as a defence for parents charged with prima facie assault of their children. Many parents saw this bill as an attempt to ban smacking outright.

In August 2007, Key came in for criticism when he changed his position regarding the Therapeutic Products and Medicine Bill::"John Key had finally slipped up. National's leader had told the Herald on Tuesday he would have signed up to a New Zealand First-initiated compromise on the stalled Therapeutic Products and Medicines Bill had he seen it - and was still willing to sign up - only to change his mind yesterday after his remarks appeared in print." [cite web |url=http://www.nzherald.co.nz/section/466/story.cfm?c_id=466&objectid=10455321 |title=John Armstrong: At last, Labour gets to give Key a good kicking |publisher= |author=John Armstrong |date=2 August 2007 |accessdate=2007-08-23]

Also in August 2007, Labour's hinted in Parliament that Labour were going to try to link Key to the 1987 "H-Fee" scandal, which involved Key's former employer Elders Merchant Finance and a payment to Equiticorp Chief Executive Allan Hawkins. Hawkins and Elders executive Ken Jarrett were later jailed for fraud. Key forestalled the accusation by declaring that he had left Elders months before the event, that he had no knowledge of the deal, and that his interview with the Serious Fraud Office during the investigation into the affair could only have helped to convict the people involved. This statement was supported publicly by then-SFO director Charles Sturt. [cite news |last=Trevett |first=Clare |title=Former SFO chief backs Key's claims |work= |date=2007-08-25 |url=http://www.nzherald.co.nz/topic/story.cfm?c_id=213&objectid=10459777 |accessdate=2008-02-26] [cite news |last=Long |first=Richard |coauthors= |title=Muck-rakers desperate for dirt |work= |pages= |publisher= |date=2007-08-28 |archiveurl=http://www.webcitation.org/5WQHVLPlc |archivedate=2008-03-19 |url=http://www.stuff.co.nz/4181331a1861.html |accessdate=2007-05-27]

Labour MPs have criticised Key for not releasing specific policy information at their annual conference. Key responded that National will set its own policy agenda and that there is adequate time before the next election for voters to digest National Party policy proposals.

Key portrays himself as more centrist than his predecessor, . However he also notes the differences are more of style, than anything else.Fact|date=February 2008 Key has in the past noted others' concern at the pace of asset sales, but argued that the arguments against selling assets in the 1980s were largely irrational.Fact|date=February 2008 In an interview that appeared in the Herald on March 23, 2002, he is quoted as saying "some form of orientation towards privatisation in health, education and superannuation makes sense."

Key says that he believes that is a real phenomenon, and that the Government needs to implement measures to reduce human contribution to global warming. Key has committed the National Party to working towards reducing greenhouse emissions in New Zealand by 50% within the next fifty years. Critics note that as recently as 2005, Key made statements indicating that he was skeptical of the effects and impact of climate change. Fact|date=February 2008

Critics note that Key has changed his views on the Iraq war since becoming leader of the opposition. In 2003, as an opposition MP, Key emphasised National's position of supporting New Zealand's traditional allies, the and . Key came under fire in the New Zealand Parliament in August 2007, when the Government claimed that had Key been Prime Minister at the time, he would have sent troops to Iraq.

Key does not profess any faith as such, describing himself as "not a heavy believer" and not a believer in life after death, although his mother was which makes him Jewish through his lineage. If elected to government, and subsequently as Prime Minister, Key would be the third premier of New Zealand with Jewish ancestry ( and Francis Bell being the other two).