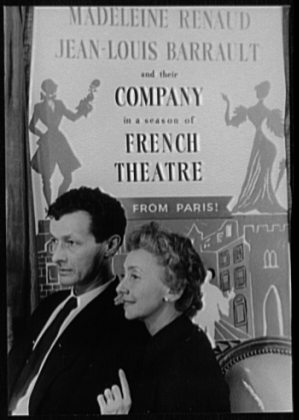 Jean-Louis Barrault (, – in ) was a French , director and mime artist, training that served him well when he portrayed the 19th-century mime (Baptiste Debureau) in 's 1945 film "Les Enfants du Paradis" ("Children of Paradise").

In 1940, he married the actress . They founded many theatres together and toured extensively, including in .

He was the uncle of actress and sometime sponsor of . He died from a heart attack in at the age of 84.

Perhaps the greatest extant display of his skill as a mime is in the 1959 made-for-TV movie directed by , "Le Testament du Docteur Cordelier" [ [http://www.imdb.com/title/tt0053348/ IMDb entry for "Cordelier"] ] ("", a.k.a. "Experiment in Evil"), based on 's novella, "", in which Barrault, unaided by any additional make-up, editing or camera tricks, completely transforms himself, entirely on-screen, in an unbroken sequential shoot, from the noble Dr. Cordelier into the evil and wicked M. Opale.